A couple of weeks ago Cloudflare, one of our competitors, published a blog post in which they claimed that their edge compute platform is roughly three times as fast as Compute@Edge. This nonsensical conclusion provides a great example of how statistics can be used to mislead. Read on for an analysis of Cloudflare’s testing methodology, and the results of a more scientific and useful comparison.

It has often been said that there are three kinds of untruths: lies, damned lies, and statistics. This is perhaps unfair: Some statistics are pretty sound. But these are not:

OK, so what's wrong with their tests?

The design and execution of Cloudflare’s tests were flawed in several ways:

This is bad science. So why are we drawing attention to it, and since we are choosing to do so, what is the performance of Compute@Edge really like?

To be clear, we can't actually say that for sure because the TTFB metric doesn't really tell you which platform is “faster” (more on that in a minute), but we can say that in a less biased version of the same tests, our network and Compute@Edge scores better than Cloudflare's network and Cloudflare Workers, even on TTFB.

It's difficult to measure the relative performance of edge networks. We've moved beyond the CDN era; today, you can’t use a single variable to judge the value of an edge network. Cloudflare in particular should know this because they have an admirable set of capabilities at the edge — none of which were used in this exercise.

The distracting nature of this kind of “benchmark” makes us wary of participating in a comparison on anything resembling similar terms, and it's impossible for us to define our own terms for a comparison because Cloudflare’s terms of use prohibit benchmarking of their services: 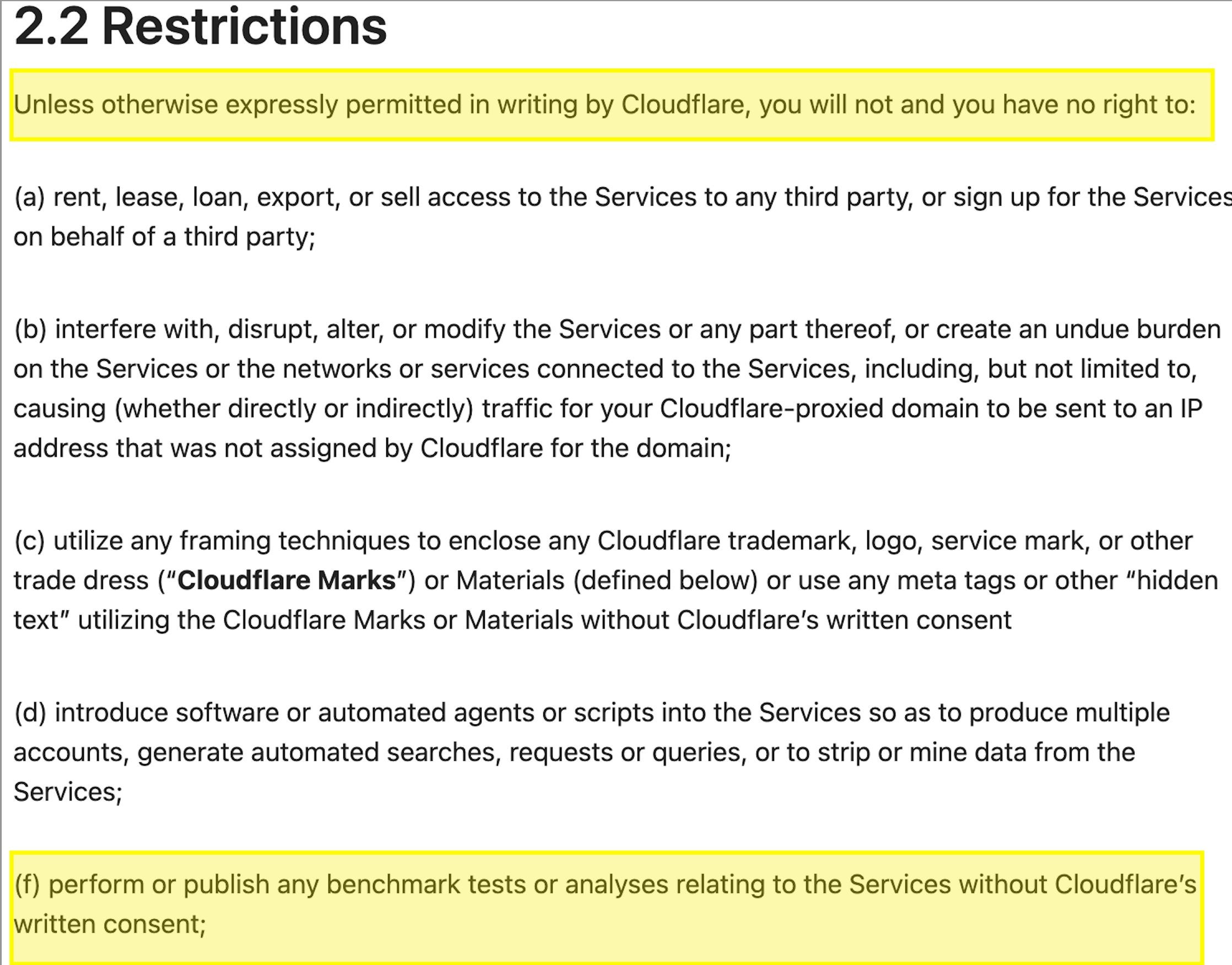 So instead, we ran the same tests (echoing headers and measuring TTFB via Catchpoint) against our own platform, but with a few key differences:

You can view the raw results yourself, but the bottom line is that, on these fairer tests, our network and Compute@Edge is faster than Cloudflare's network and Workers in four out of six regions, even on this flawed metric:

On the basis of Cloudflare's preferred TTFB, our network running Compute@Edge is nearly twice as fast as Cloudflare Workers in North America and Europe, and 10 times faster in Oceania. Remember, their terms of service prohibit benchmarking, which prevents us from testing them directly and attempting to replicate that outlying Oceania number.

Compute@Edge doesn't have a native language, since we run WebAssembly binaries directly on our edge servers, but Rust is the language that currently offers one of the best combinations of developer experience and performance of compiled code. You absolutely can run anything on Compute@Edge if it compiles to WebAssembly — and people do.

We know support for JavaScript is important to many customers, but we're not yet satisfied with the performance of Compute@Edge packages compiled from JavaScript. That's why it's in beta. When a product is ready for production, we remove the beta designation.

In creating our edge computing platform, our entire approach has been to chart a course that’s quite different from most of the industry. This means our performance also evolves differently — because the problems we start out with are different.

Let’s dive into that TTFB metric in a bit more detail and explore why it's not useful in this context.

Cloudflare published the results of tests that don’t measure compute performance in any meaningful way. Instead of measuring a single variable, we should use a benchmark that evaluates the performance of edge compute in core use cases that are important to customers. Network RTT is part of it, but so are variables such as:

Cloudflare's tests are even bad at measuring network round trip time — because time-to-first-byte covers both the network RTT and the server think time — and there's no way to understand how each component contributes to the overall number. If you wanted to better understand the performance, you'd separate them.

For example, consider the graphs below, which show medians for both network RTT and TTFB in Asia for a Fastly service. A cache hit served from our VCL platform (left graph) is so fast that the network RTT (blue) is essentially the same as the TTFB (green). Using Compute@Edge (right), the TTFB is distinct, reflecting the increased cost of running arbitrary code — but still, the RTT is the vast majority of the number in regions with generally higher connection latency (Asia in the examples below). 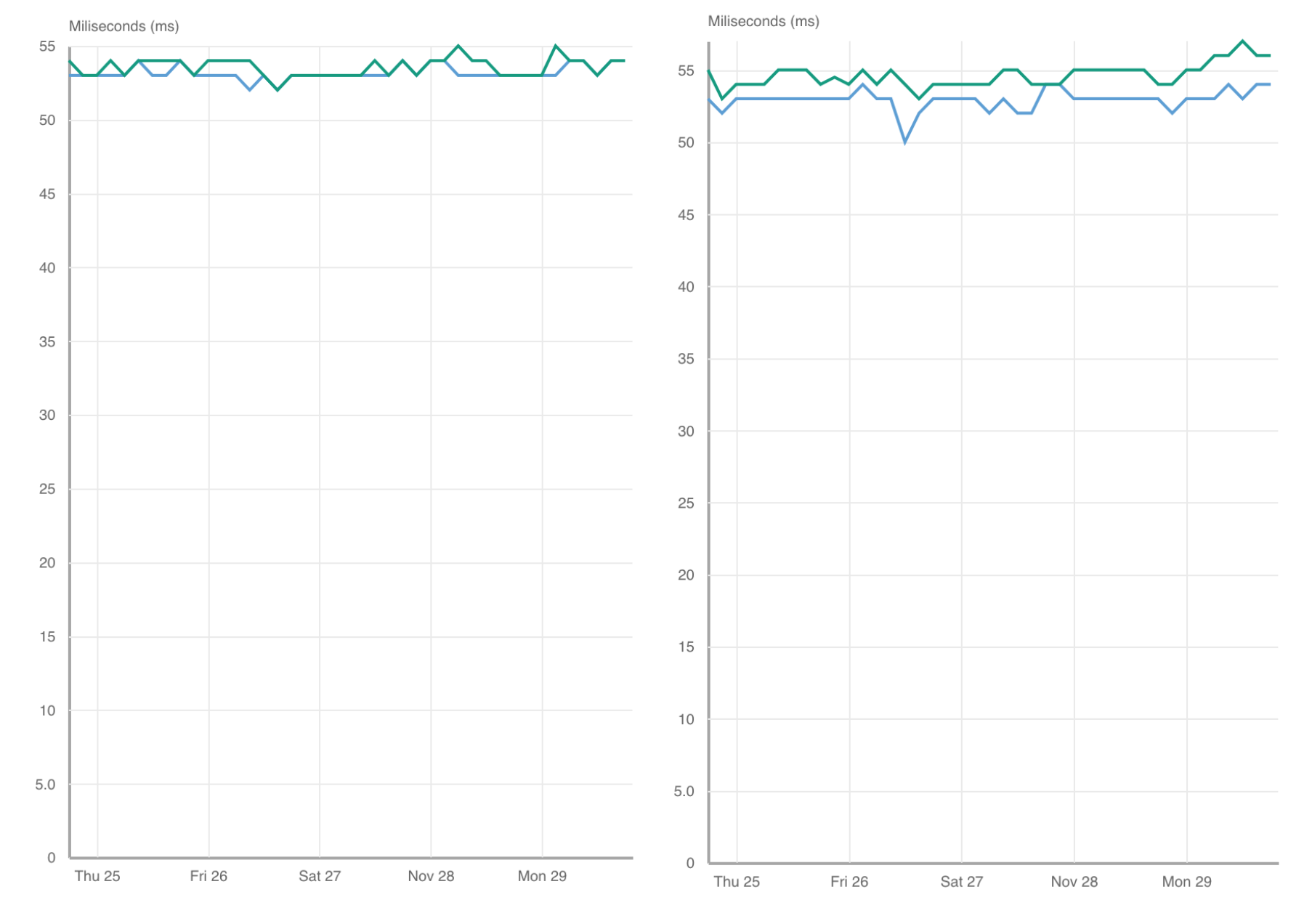 RTT varies based on geography, and we are seeing that variance pretty dramatically in the results of the main test we showed earlier. As a result, what you are not seeing in Cloudflare's tests is a clear picture of the relative performance of our edge compute platforms — the “server think time.”

We are working on a benchmark suite that will assess performance in a more realistic environment, and we’ll publish the code for that benchmark suite and have the results measured and published by an independent third party — because it's supremely tiresome to have nerd-sniping competitions which distract from improving the internet for everyone.

In the meantime it is absolutely not true that Cloudflare Workers is 196% faster than Compute@Edge — in fact, it's not faster at all. But the important variables for our customers are the ones that are critical for their business. If you want to know whether we’re fast enough for your particular needs on the metrics you care about, we encourage you to try us and measure for yourself.

Laura Thomson is Vice President of Engineering at Fastly. She is also a member of the Board of Trustees of the Internet Society. Previously, she spent more than a decade at Mozilla, leading engineering and operations teams, and was on the board of Let's Encrypt. Laura has spoken at many conferences worldwide over the last 20 years and is the author of best-selling software development books.