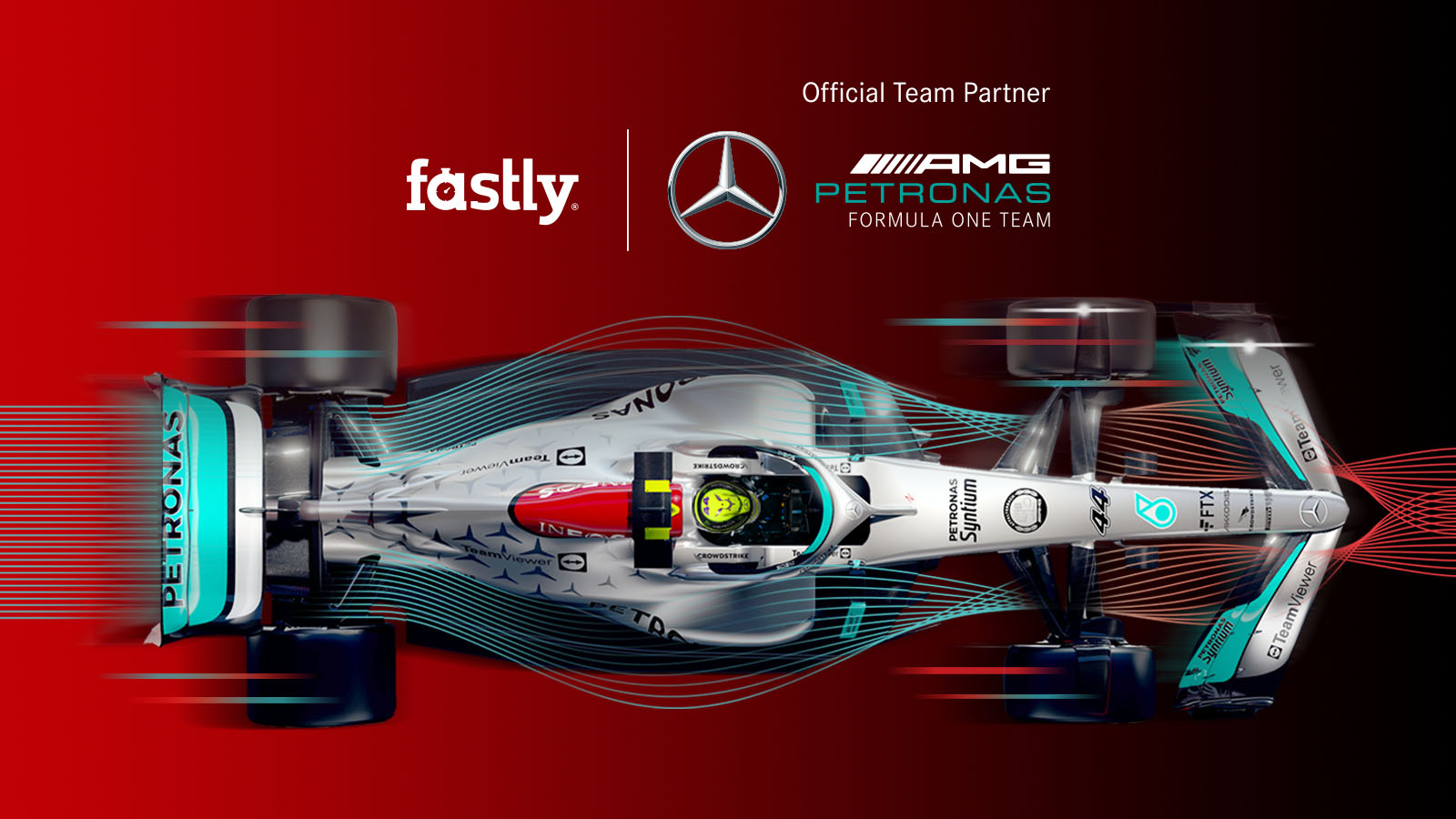 SAN FRANCISCO and BRACKLEY, July 27, 2022 – Fastly, Inc. (NYSE: FSLY) and Mercedes-AMG PETRONAS Formula One Team, eight-time consecutive FIA Formula One™ World Constructors’ Champions, today announced that the world’s fastest global edge cloud platform is now an official global sponsor. The long-term partnership reflects the companies’ shared commitment to experiences that are fast, safe, and leading edge – both on the track and on the internet.

This partnership comes at a time of unprecedented popularity for Formula 1, which is experiencing double-digit growth in viewers and followers – making it the fastest growing major sports league on the planet with a cumulative TV audience of 1.55 billion fans. In the digital and social arena, Formula 1 is outperforming all other major sports. A catalyst to Formula 1’s growth has been the availability of high-performance live sports streaming services as well as Drive to Survive, the smash-hit Netflix documentary that tells the stories beyond the circuit.

“We have a deep appreciation for what Fastly delivers to its customers: the ultimate digital performance, at incredible speed,” said Toto Wolff, CEO and Team Principal of the Mercedes-AMG PETRONAS F1 Team. “Our fans expect the very best experiences, not just on track but on their screens – and Fastly will be an important partner to help us achieve this. We’re thrilled to work alongside a team that shares our commitment to high-performance, safety and relentless innovation.”

“Our fight for milliseconds on the track relies upon the strength of our digital infrastructure and the speed of our network,” said Mercedes-AMG PETRONAS Formula One Team IT Director, Michael Taylor. “Joining forces with Fastly, who share our obsession for innovation and uncompromising performance, will help to drive us forward on the track and power our fan experience in the virtual world.”

This global partnership will kick off at the end of July 2022. In addition to collaboration between the two brands, the partnership will include the Mercedes F1 team leveraging Fastly’s technology to heighten its online and digital fan experiences in the future.

“For the Mercedes-AMG PETRONAS F1 team and Fastly, milliseconds matter,“ said Margaret Arakawa, Chief Marketing Officer of Fastly. “The Fastly and Mercedes F1 partnership showcases two brands that are synonymous with performance and speed at global scale. Fastly is excited to push the limits of speed and security alongside a team that is not only one of the most legendary names in global motorsport, but also shares our values around innovation, safety, and performance with integrity. The team has proven year after year that relentless focus and dedication to innovation – supported by technological infrastructure that is fast, secure, and unwaveringly reliable – leads to winning results.”

Fans can experience this new partnership at Formula 1 events beginning this month, as well as tech industry events including the Black Hat cybersecurity conference in Las Vegas this August. Visit our website to learn more.

Fastly’s powerful and programmable edge cloud platform helps the world’s top brands deliver the fastest online experiences possible, while improving site performance, enhancing security, and empowering innovation at global scale. With world-class support that consistently achieves 95%+ customer satisfaction ratings,* Fastly’s beloved suite of edge compute, delivery, and security offerings has been recognized as a leader by industry analysts such as IDC, Forrester and Gartner. Compared to legacy providers, Fastly’s powerful and modern network architecture is the fastest on the planet, empowering developers to deliver secure websites and apps at global scale with rapid time-to-market and industry-leading cost savings. Thousands of the world’s most prominent organizations trust Fastly to help them upgrade the internet experience, including Reddit, Stripe, Neiman Marcus, The New York Times, Epic Games, and GitHub. Learn more about Fastly at https://www.fastly.com/, and follow us @fastly.

About Mercedes-AMG Petronas Formula One

Mercedes-AMG Petronas Formula One Team is the works team of Mercedes-Benz, competing at the pinnacle of motorsport – the FIA Formula One™ World Championship. Formula One is like nothing else in the sporting sphere. It’s a demanding technical and human challenge, combining cutting-edge technologies and innovation, high-performance management and elite teamwork. At Mercedes-AMG Petronas Formula One Team, a group of passionate and determined people work to design, develop, manufacture and race the cars driven by seven-time World Champion Lewis Hamilton and young star George Russell. The team has set a new benchmark for F1 success during the sport’s current Hybrid era, winning consecutive Drivers’ and Constructors’ World Championships in 2014, 2015, 2016, 2017, 2018, 2019 and 2020, and the Constructors’ Championship in 2021. During those title-winning seasons, the team has scored 111 wins, 232 podium finishes, 118 pole positions, 81 fastest laps and 53 one-two finishes from 160 race starts.