Can the Internet Handle Recent Traffic Increases? Fastly Says Yes, It Can

SAN FRANCISCO (April 8, 2020) – Fastly, Inc. (NYSE: FSLY), a global edge cloud platform, today announced observed traffic patterns on the internet between January and March 2020. The analysis delves into regional trends for key U.S. states and countries around the globe that are some of the most impacted by the COVID-19 pandemic (as of the end of March 2020), as well as activity within industries including gaming, streaming, digital publishing, social media, and edtech. Fastly concludes that internet quality challenges are largely related to regional policy enactments such as school closures and stay-at-home orders. Most industries are seeing upward traffic trends, with the digital publishing sector seeing the highest activity increases of industries analyzed.

“Overall, the internet is in good health,” said Fastly’s Chief Architect and Founder, Artur Bergman. “This is partly due to the regionality of these trends, but modern websites and applications are also better able to adapt to changing internet conditions. We are seeing the internet bring people together, whether for work, entertainment, or to get in touch with family and friends. And while there’s more traffic than in previous months, the internet is resilient.”

Internet Quality Challenges Correlate with Regional Policy Changes To understand internet quality in impacted regions around the globe, Fastly used two key metrics: changes in the traffic volume served to those regions as a reflection of changes in internet use, and changes in download speed measured at their servers as a reflection of internet quality. Fastly’s analysis shows regions heavily impacted by the pandemic are seeing traffic volume go up, often strongly aligned with public policy announcements and enactments about school closures and lockdowns. Download speeds trend down as people become homebound with school closures and shelter-in-place or lockdowns taking effect. The quality decreases that Fastly observed happened outside of its networks and interconnects, and seemed to be strongly correlated with regional policy and population shifts, implying that internet quality is unlikely to degrade much further for regions that are already under stay-at-home orders.

Fastly has evaluated the countries of France, Italy, Japan, Spain, and the UK. Because policy shifts in the U.S. are taking place at the state level, Fastly investigated trends in the U.S. for four of the hardest hit U.S. states by COVID-19: California, Michigan, and New York and New Jersey. Fastly observed the following impacts to geographic traffic:

From these findings, we learn that speed decreases may be more aligned with population shifts toward more internet use from homes, rather than with a traffic increase alone. In general, most regions saw their download speeds stabilize once school closures and lockdowns were fully enacted, when most of the population became homebound. For most regions, this happened mid-to-late March.

Increased Activity in Informational and Entertainment Verticals Fastly also analyzed industry-specific internet activity by comparing average requests per second (RPS), week-over-week, between two sets of dates: January 6, 2020, and February 16, 2020; and February 16, 2020, to March 29, 2020. The first set of dates represent what Fastly considers to be activity attributed to organic growth, as mainstream attention on the pandemic had not yet picked up to its current pace. The second set of dates occur during a much more dynamic era of coronavirus-related developments, and was instructive in helping understand how human behavior may be shifting in response to COVID-19.

During those time frames for each of the below verticals, Fastly observed the following traffic patterns: 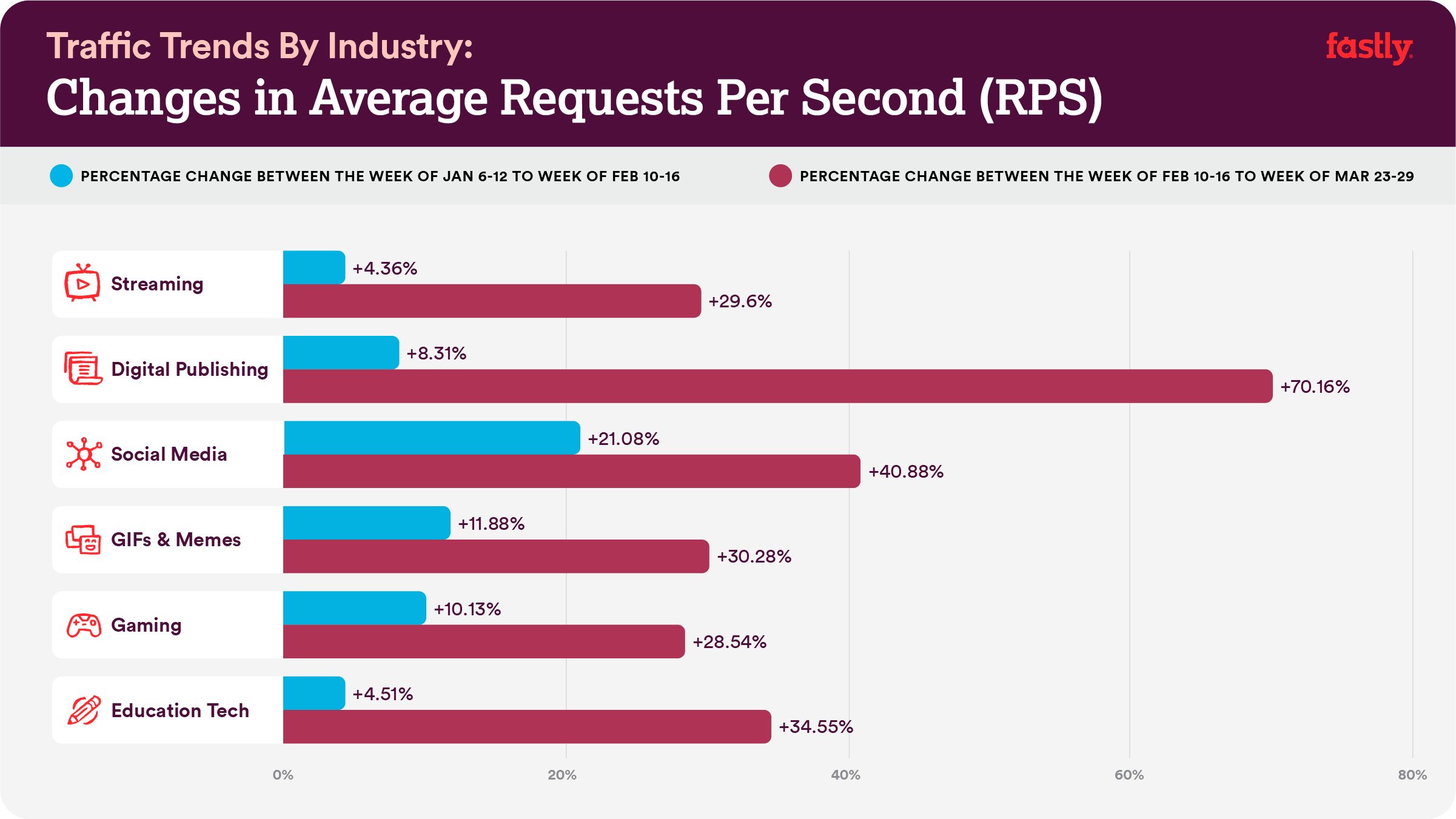 Check out the Fastly blog that explores an in-depth view of this data and other findings. For more information about how Fastly accommodates increases in internet activity around the globe, read another recent post, "Capacity planning and network expansion in a remote-first world."

Methodology and Sources
For analysis of regional traffic, Fastly used the following metrics, which were gathered from sampled TCP connection stats (tcp_info) at connection close time as part of Fastly’s fleet-wide performance monitoring infrastructure:
- Traffic represents the average number of data bytes per day that were delivered to various geographies from all of our servers (acked_bytes field in tcp_info).
- Download speed represents the delivery rate reported by TCP over all connections from a region, averaged over a day (delivery_rate field in tcp_info). While the reported values are averages, various percentiles for download speeds all show similar trends and ratios to the average.

For global analysis of verticals, Fastly measured average requests per second (RPS) recorded at all our servers. RPS is a count of requests received at our serves from end users every second.

Significant dates on policy changes or announcements in each region were sourced from news and country, regional, state, and local announcements. The COVID Tracking Project and 2019 Novel Coronavirus COVID-19 (2019-nCoV) Data Repository by Johns Hopkins CSSE informed the confirmed COVID-19 cases trajectory on the regional graphs.

Forward Looking Statements
This press release contains “forward-looking” statements that are based on Fastly’s beliefs and assumptions and on information currently available to Fastly on the date of this press release. Forward-looking statements may involve known and unknown risks, uncertainties, and other factors that may cause its actual results, performance, or achievements to be materially different from those expressed or implied by the forward-looking statements. These statements include, but are not limited to, those regarding the internet’s ability to handle increased activity and the likelihood of future degradation of internet quality, the health or resiliency of the internet, the continued ability of website and streaming video sites to function, the correlation between internet quality and regional stay-at-home orders, and the continuation of any of the trends described above including increased activity in informational and entertainment verticals. Except as required by law, Fastly assumes no obligation to update these forward-looking statements publicly, or to update the reasons actual results could differ materially from those anticipated in the forward-looking statements, even if new information becomes available in the future. Important factors that could cause Fastly’s actual results to differ materially are detailed from time to time in the reports Fastly files with the Securities and Exchange Commission (SEC), including in its Annual Report on Form 10-K for the year ended December 31, 2019. Copies of reports filed with the SEC are posted on Fastly’s website and are available from Fastly without charge.