Compute@Edge enhances the developer experience with the additions of Terraform API Support, a powerful CLI, expanded language support, and more

“We chose Fastly as our platform because Fastly's API driven and performance focused products are clearly customer and engineering centric, and seven years later it is exciting to see that dedication sustained with Compute@Edge," said Pablo Mercado, CTO of Vox Media. "The approach Fastly has taken with their investment in Compute@Edge makes real the promise of serverless, it expands what is possible for our developers to build while also giving us the confidence of rock solid performance and stability. This combined with Fastly's engineer-to-engineer customer service really sets Fastly apart as a great partner for delivering exceptional digital experiences to our readers and viewers, and to build the Vox Media future with."

For developers looking to build and execute code closer to their end users, Compute@Edge is a powerful and performant serverless computing environment that runs on Fastly’s globally distributed edge cloud platform. Fastly’s serverless solution provides the benefits of serverless computing without the challenges that typically come with outsourcing infrastructure, allowing for better performance, enhanced visibility, and reduced latency. By building advanced applications and custom logic on the edge, organizations can reduce infrastructure costs and scale instantly. 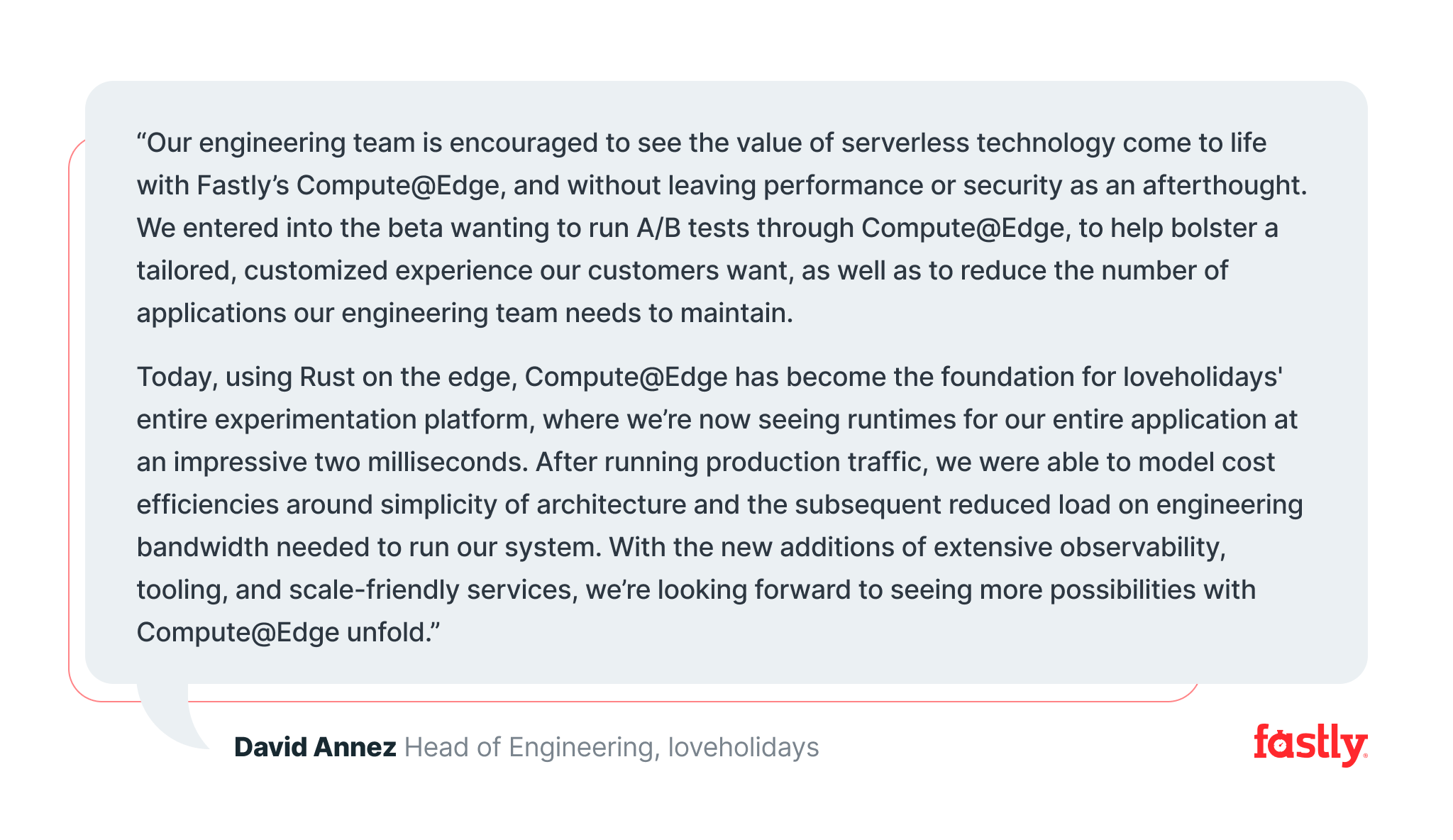 Compute@Edge prioritizes the developer experience within serverless compute environments, and Fastly continues to deliver on this imperative with its newest enhancements, including:

"Our partnership with Fastly is built upon a mutual commitment to providing high-quality, seamless CI/CD experiences and exceptional tooling for developers,” said Asvin Ramesh, director of technology alliances at HashiCorp. “We're excited to share that Fastly's Compute@Edge now integrates with HashiCorp Terraform, enabling large-scale developer empowerment and even more flexibility in managing infrastructure — all in one place.”

“Serverless is the future of application development and the opportunities it presents for innovation are endless,” said CTO of Fastly, Tyler McMullen. “While this technology is still relatively young, there is growing awareness amongst developers and business leaders alike of what a shift to serverless can mean for their ability to accelerate innovation and scale. And as the technology behind Compute@Edge nullifies cold starts and cybersecurity threats other serverless offerings often face, serverless now also means better performance and security. We’re incredibly humbled to see the industry-leading use cases our customers are building for things like low latency live streaming, real-time security authentication, microservice migration, content stitching, and more. This latest progress with Compute@Edge elevates the flexibility and speed engineering teams are relying on to meet the moment.” 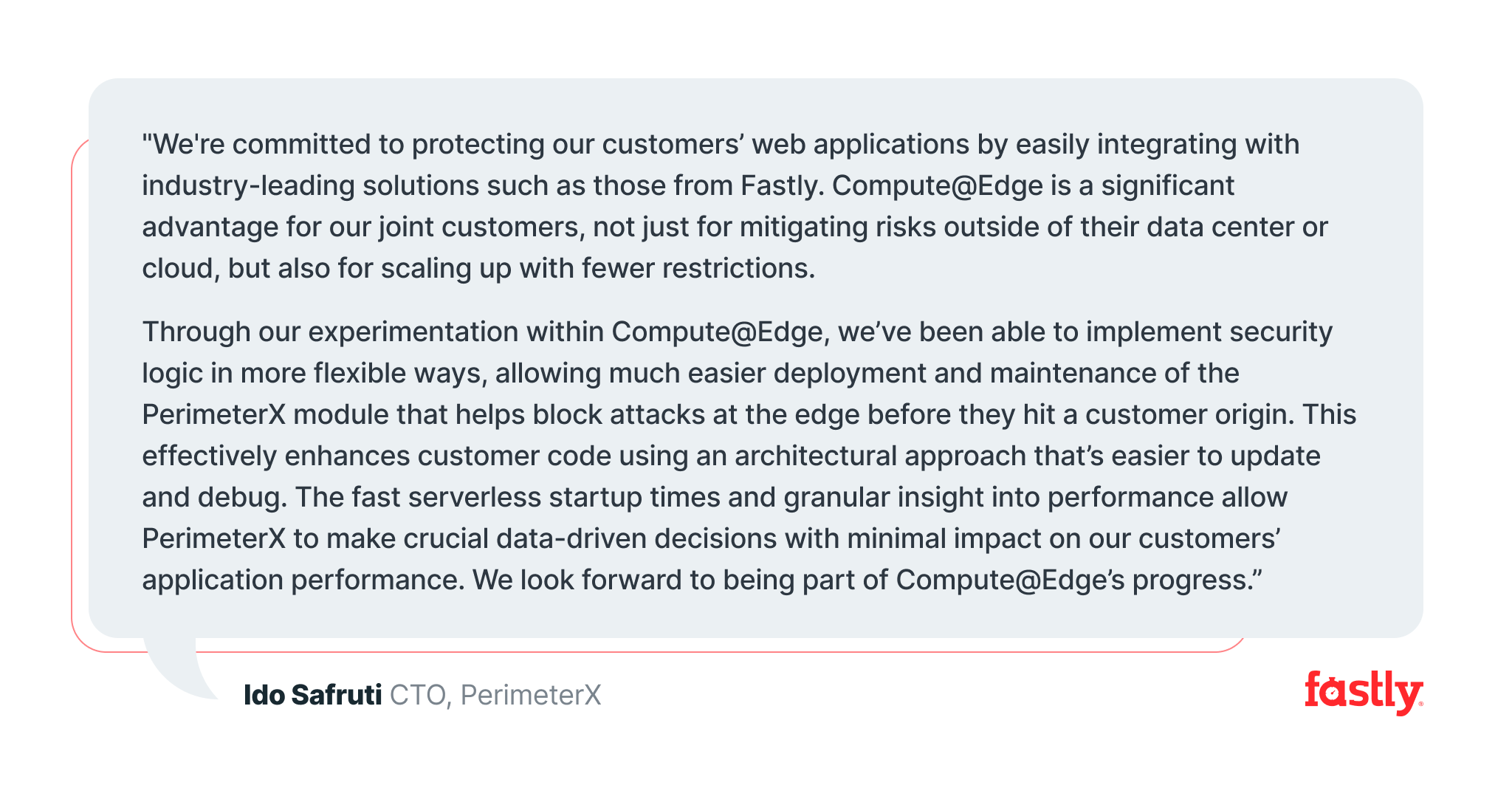 To learn more about Compute@Edge, read its latest blog, or visit the Fastly Developer Hub. With Fastly starter kits and a Solution Library, language tutorials, 25+ Rust recipes, and more, the Developer Hub is a robust resource helping developers get up and running quickly, expediting the ability to build and deploy innovative new use cases. Developers and businesses can sign up for additional Compute@Edge details by visiting: https://www.fastly.com/products/edge-compute/serverless.

This press release contains “forward-looking” statements that are based on Fastly’s beliefs and assumptions and on information currently available to Fastly on the date of this press release. Forward-looking statements may involve known and unknown risks, uncertainties, and other factors that may cause its actual results, performance, or achievements to be materially different from those expressed or implied by the forward-looking statements. These statements include, but are not limited to, those regarding the expected benefits and functionality of Compute@Edge, including enablement of developers to architect for unprecedented levels of internet traffic and heightened expectations around digital experiences while keeping performance, efficiency, and security at the forefront, better performance, enhanced visibility, and reduced latency, the elimination of cold starts and cybersecurity threats faced by other serverless offerings, and accelerated innovation and scale. Except as required by law, Fastly assumes no obligation to update these forward-looking statements publicly, or to update the reasons actual results could differ materially from those anticipated in the forward-looking statements, even if new information becomes available in the future. Important factors that could cause Fastly’s actual results to differ materially are detailed from time to time in the reports Fastly files with the Securities and Exchange Commission (SEC), including in Fastly’s Annual Report on Form 10-K for the fiscal year ended December 31, 2019, and our Quarterly Reports on Form 10-Q. Copies of reports filed with the SEC are posted on Fastly’s website and are available from Fastly without charge.