Don’t Let Your Site Crash and Burn This Holiday Season

Americans are expected to spend $89 billion shopping online this holiday season, according to Forrester Research. Is your ecommerce site ready for the massive spike in traffic? In this blog post, I’ll discuss available options for offloading traffic this holiday season. We’ll explore if you’re truly caching at the edge or if you’re forced to limit your site with “dumbed down” content in order to accommodate traffic spikes.

In the past, one of the only ways to cope with the huge influx of users during the holiday season was to buy tons of extra server space. It would sit idle most of the year just so it could be available in November and December.

Over the past few years, ecommerce companies have turned to another solution: offloading as much of their traffic as possible onto a content delivery network (CDN). This is where your company might be right now. However, many traditional CDNs on the market are only able to cache static content, such as text and images. This leaves you with two options:

These choices are both terrible. But what if you could cache your content on a CDN without having to dumb down your site? What if more types of content are cacheable than you think?

Are You Limiting Yourself?

But static vs. dynamic content is really more of a spectrum. And the line between what can and can’t be cached by a CDN is determined by one simple question: How quickly can your CDN purge content?

Traditional CDNs purge their content every 7 to 15 minutes. That’s too slow for many modern ecommerce sites that are incorporating dynamic elements like customer reviews and ratings, flash sales, and an interactive shopping cart. Often, this leads online retailers to that second option I discussed above — sending more and more of their content back to their origin.

Fastly can even move the logic that defines how websites are viewed by visitors out to their edge servers. Read this blog post by Hooman Beheshti, our VP of Technology, for an in-depth look on caching dynamic content.

With so much content offloaded, you can maintain a modern, dynamic website, and avoid those traffic spikes that can cause you to crash and miss out on tons of potential sales. Ecommerce company Shopify experienced this firsthand during the 2014 Super Bowl, when their customer GoldieBlox saw an 18,000% spike in traffic — the kind of spike that can crash a small company’s website. By using Fastly, the online store was able to handle the increase in traffic while maintaining a quick, responsive, and reliable experience.

If you’re an ecommerce website using a traditional CDN, chances are your content isn’t really at the edge.

Traditional CDNs only have so much real estate at the edge to offer their clients, due to the fact that they mostly rely on spinning hard drives. That means they have to prioritize which content is cached at the edge, and which is cached further in.

They tend to cache content that gets called the most on edge servers. It becomes a popularity contest — content from bigger, more well-known sites gets prime real estate. Smaller ecommerce companies have to settle for their content being cached further in, meaning longer load times for customers trying to access the site.

Companies cache things on edge servers, closest to the user, specifically to improve performance. If your content isn’t really at the edge, your site isn’t performing as well as it could.

Fastly avoids this problem by using solid state drives (SSDs), so there is plenty of space at the edge for all ecommerce sites to cache their content, not just the popular ones.

One study found that 46% of shoppers said they’ll abandon their online shopping cart if a site or app takes more than 3 seconds to load this holiday season. To provide the best possible performance, and to prevent your site from slowing down or crashing due to traffic spikes, you need to rethink your definition of static vs. dynamic content. A CDN like Fastly provides instant purge capabilities, and lets you operate seamlessly across the spectrum of static and dynamic content. This ensures you can cache all of your content — including dynamic content — at the edge, giving your customers a faster, better shopping experience.

For a deeper dive into Fastly’s technology and how it can help you this holiday season, check out these two blog posts from last year: “How to Win Black Friday" and "5 Ways To Optimize Holiday Traffic." 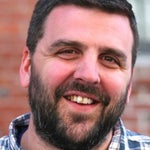 Paddy Bear is the Managing Director of Fastly in the UK and heads up the company’s operations in EMEA. Paddy has an extensive background in building and leading project delivery teams on large-scale ecommerce integrations projects, and has also spent many years developing real-time, high-performant financial systems for Wall Street, including FIX messaging platforms, an algorithmic trading engine, and reconciliation and matching systems.