More than Bernie memes: what we saw during Inauguration Day

Like many other high-profile events of global interest, online coverage of presidential inaugurations has driven significant internet traffic over at least the last dozen years. The inauguration of President Joe Biden and Vice President Kamala Harris was unique for many reasons, not the least of which was the lack of crowds due to the COVID-19 pandemic and increased security measures. While the event resulted in generally expected traffic patterns across Fastly’s digital media, social media, and meme sharing customer cohorts, users also appeared to put online shopping, banking, and education on hold during the inauguration ceremony. Below, we analyze aggregate Requests per Second (RPS) traffic on Fastly’s platform for customer cohorts in these industry verticals between 9 a.m. EST and 3 p.m. EST on January 20, 2021. Note: All times referenced are in Eastern Standard Time (UTC-05).

The figure below illustrates RPS traffic for a cohort of Fastly digital media streaming and digital media publishing customers across the United States, EMEA, and Asia Pacific regions. 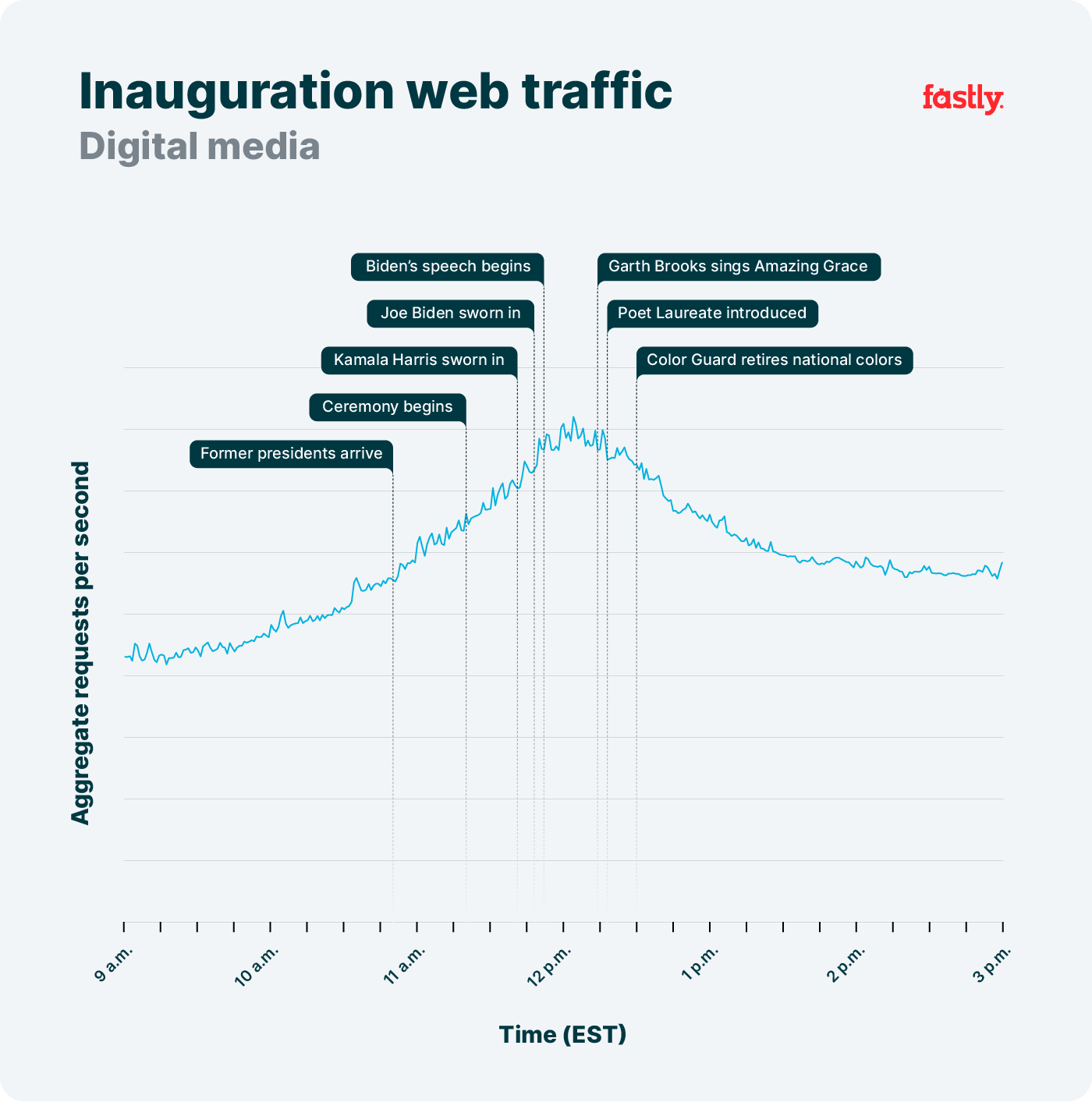 Key events during the inauguration ceremony are shown within the graph, but none appear to have driven a significant spike in traffic. Instead, traffic grew steadily throughout the morning until peaking at 12:04 p.m., midway through President Biden’s speech, 91% higher than three hours prior. After that point, traffic gradually tailed off, but at 3 p.m., it was still 36% higher than six hours prior, indicating that users remained on these sites, continuing to watch post-ceremony coverage and consume related content. 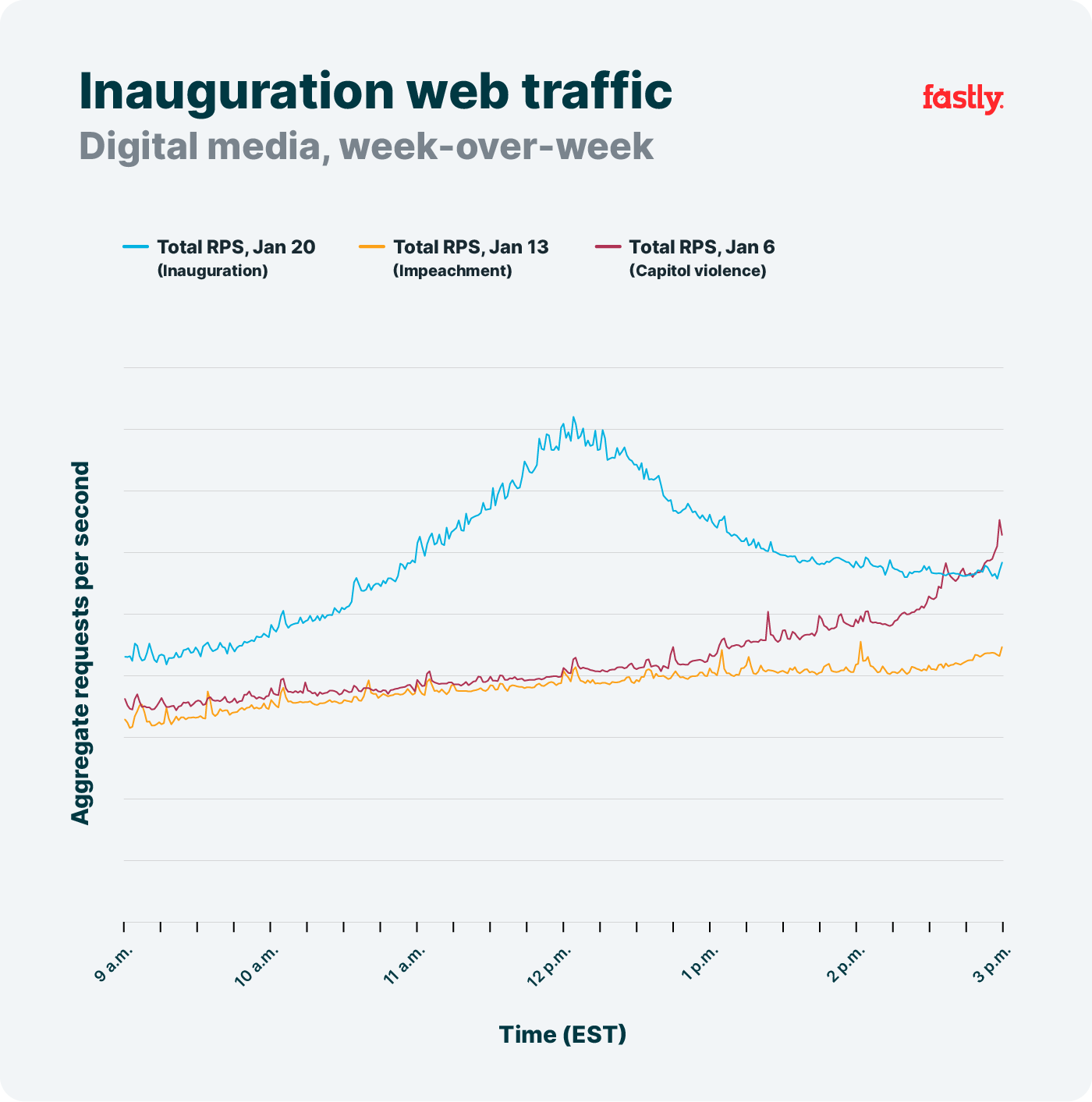 During January 2021, Wednesdays have been rather eventful, with an impeachment and the Capitol violence occurring in the weeks preceding the inauguration. The figure above compares RPS traffic for the digital media streaming and publishing customer cohort during the election on January 20 to the same period one (January 13) and two (January 6) weeks prior. At 9 a.m., traffic for these customers on Inauguration Day was 31% higher than the previous Wednesday, and 19% higher than the same time two weeks earlier. Inauguration Day’s peak traffic level at 12:04 p.m. was 100% higher than that time the previous week, and 92% higher than two weeks prior.

While the figure shows that traffic gradually increased during the morning of both January 13 and January 6, it is clear that growth accelerated more rapidly after noon on January 6. A Washington Post timeline indicates that former President Trump began speaking at the “Save America'' rally at noon, with the speech lasting for more than an hour. During and after the speech, supporters began massing at the U.S. Capitol and by 2 p.m., had pushed through barricades, reaching the Capitol doors. An inflection point is evident in the graph around that time on January 6, as media outlets increased coverage of the events as they unfolded.

In the following sections, traffic in the figures below is normalized to the RPS volume at 9 a.m.  to better illustrate the trends seen during the inauguration. Although the formal ceremony ended around 1 p.m., we analyzed traffic data through 3 p.m. to show how traffic trended after the event. And similar to the figures above, key events during the inauguration are highlighted on the graph.

Meme creation and sharing have become an integral part of online culture, and the Biden/Harris inauguration resulted in its fair share, although Vermont Senator Bernie Sanders and his mittens stole the show. And of course, these memes were shared through social media platforms, in addition to commentary and observations during the inauguration ceremony. 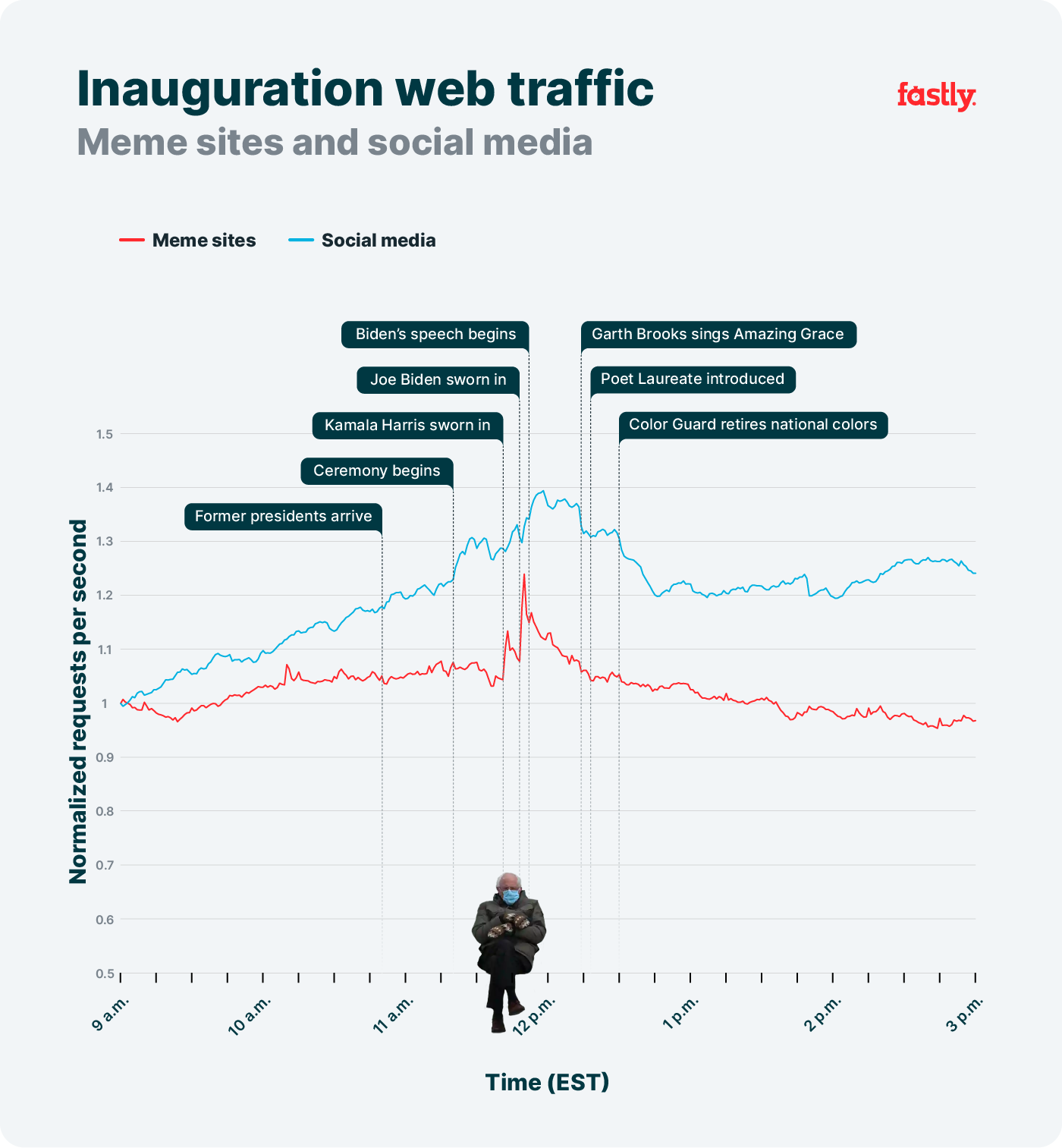 Meme creation and sharing traffic started the day elevated, 5% higher than at 9 a.m. the previous Wednesday (not shown on the graph). Traffic peaked at 11:50 a.m., right after Joe Biden was sworn in as the 46th President of the United States, 24% higher than at 9 a.m., and 23% higher than the same time a week prior. Meme traffic declined quickly after hitting its peak, dropping below its starting level by around 1:30 p.m.

Social media traffic also began the day strong, 6.2% higher than at 9 a.m. the previous Wednesday (not shown on the graph). Social traffic during the inauguration peaked at 11:58 a.m., about five minutes into President Biden’s speech. Peak traffic was 38% higher than at 9 a.m., and 29% higher than the same time a week prior. Social traffic saw a noticeable decline after the Color Guard retired the national colors at 12:30 p.m., but remained elevated through 3 p.m.

Building on previous observations made by Google during President Obama’s first inauguration in 2009, we explored whether similar behavior held true a dozen years later, looking at how traffic to various types of Internet activity changed during the inauguration ceremony. 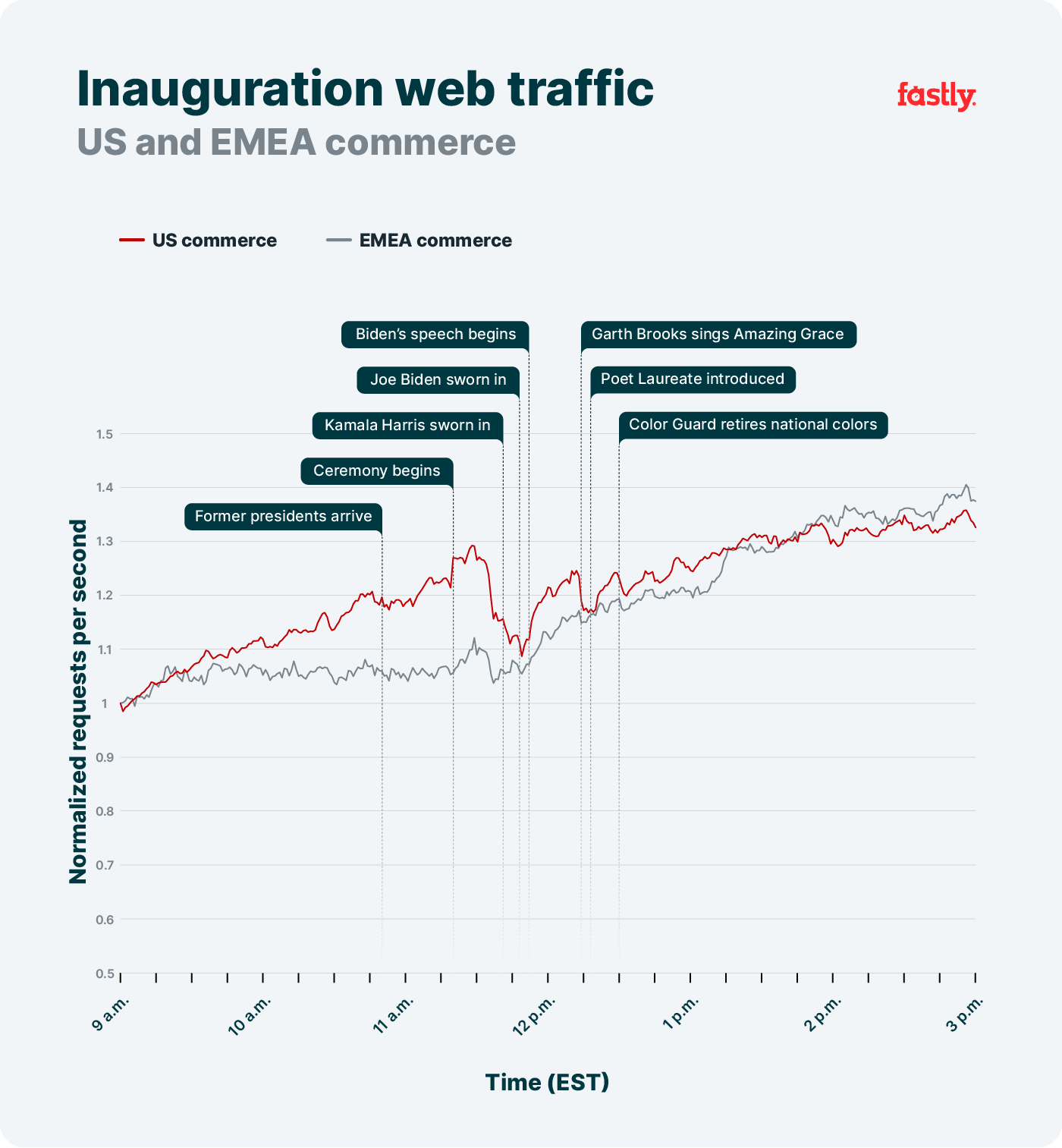 The figure above illustrates RPS traffic during the inauguration for the U.S. and EMEA commerce customer cohorts also analyzed in the December 2020 “Cyber Five: what we saw during ecommerce's big week” blog post.

In comparing the changes seen to U.S. commerce customer traffic to a timeline of events during the inauguration ceremony, we can see that several correlate with increases or decreases in shopping activity. Cohort traffic grew 29% between 9 a.m. and the peak during the ceremony at 11:28 a.m., just before the prayer. Traffic subsequently dropped 16% and reached its lowest level during the ceremony at 11:49 a.m., after the national anthem, Pledge of Allegiance, Kamala Harris being sworn in as Vice President, and Joe Biden being sworn in as President. Shopping resumed during President Biden’s speech, growing 15%, but Garth Brooks’ rendition of “Amazing Grace” drew attention away from the online stores, causing a 6.2% drop in traffic. Although National Youth Poet Laureate Amanda Gorman drew praise for her reading, commerce traffic began to increase upon her introduction and generally climbed throughout the afternoon. Comparing traffic levels to the previous Wednesday, traffic started the day 2.9% lower at 9 a.m., and the 11:49 a.m. dip was 15% lower than the same time a week prior (not shown on the graph).

Some event correlations with changes in shopping activity are also evident in EMEA commerce customer traffic, though the differences were not as significant or numerous. Traffic grew 12% between 9 a.m. and the ceremony peak that occurred just before the prayer. Like the U.S. commerce observations, traffic dropped 6.0% through Joe Biden being sworn in, and then returned to growth for the balance of the period. Although the inauguration was evidently of some interest to EMEA consumers, it (unsurprisingly) didn’t draw their attention quite as significantly as in the United States; traffic was 8.3% higher at 9 a.m. as compared to the same time a week ago, and was still 1.2% higher at its lowest point than it was at the same time on January 13 (not shown on the graph).

In addition to impacting commerce traffic for retailers in the U.S. and EMEA, inauguration events could also be correlated with changes in traffic to sites associated with Fastly customer cohorts in the financial services and education verticals.

Multiple digital media platforms around the world enabled virtual participation in the Biden/Harris inauguration, driving noteworthy increases in traffic. However, that was almost expected, as so many of us default to consuming major media events online these days, instead of waiting for the 6 o’clock TV news. The impact of the inauguration on traffic to sites in other industry verticals was notable, though, with online commerce, finance, and education activity slowing as Kamala Harris and Joe Biden were sworn in.