A+E Networks brings great storytelling to 335 million people worldwide through subscriptions, video on demand (VOD) and live streaming. With a portfolio of seven popular video brands—including A&E, HISTORY, and Lifetime—they are in 70% of American homes and have 500+ million digital users. As more people are staying home and turning to TVs, tablets, and mobile devices for entertainment, demand is skyrocketing.

Gaining visibility behind the curtain

Initially, configuration management at A+E Networks was largely manual. As their portfolio grew, however, applying configurations to each of their properties was slow and cumbersome. A build across each site could take hours. As they added programming and moved to microservices, that time only expanded: multiply a hundred URLs by multiple environments and you have weeks of work.

A+E Networks needs visibility. With their legacy CDN, A+E Networks lacked the access to see what was happening and make changes themselves. Instead, they had to rely on professional services, with no view of what was going on behind the curtain. The hours of wait time for implementation were frustrating to developers, and so was the added expense.

A+E Networks wanted to empower developers to implement services and upgrades as fast as they could create them. And, like many streaming media companies, A+E Networks wanted a multi-CDN model to manage traffic spikes, build in redundancy, and—ultimately—provide a flawless user experience. That’s why they turned to Fastly.

"We’re a very hands-on organization. The more we were trying to accomplish, the more we saw we needed real-time visibility.”


“Fastly also does a great job caching our content, helping us achieve the scale we need to meet our peak demands while making sure our streaming costs are manageable as traffic increases.”

Adding Fastly to their stack transformed the way A+E Networks managed configuration workflows. Fastly’s edge cloud platform puts the tools in developers’ hands, with full API access and a highly customizable edge computing language that lets them generate, compile, and implement changes quickly, with no downtime. Now a configuration that would have taken hours to propagate takes milliseconds. Even when you’re testing everything, there can sometimes be issues that only appear in production. With their legacy CDN, waiting for a rollback took hours.

“In a CI/CD world, rollbacks are just as important as fast deployments.Suffering the pain of waiting for a rollback is not fun. With Fastly it’s much safer, and the rollback just takes moments.”

Adopting Fastly’s Media Shield to optimize their multi-CDN strategy has also been a boon for workflows. Each of their CDNs effectively use Media Shield as their origin, significantly reducing their actual origin traffic. That makes the experience faster for viewers, plus it helps them reduce the expense of traffic going back to origin. For developers, that means new configurations are implemented just once rather than repeatedly.

“Now we don’t have to worry about having separate configs and doing things differently on each of our CDNs. We’ve shifted all of that logic onto Fastly’s Media Shield, which has been a unifying force that makes configs much easier.” 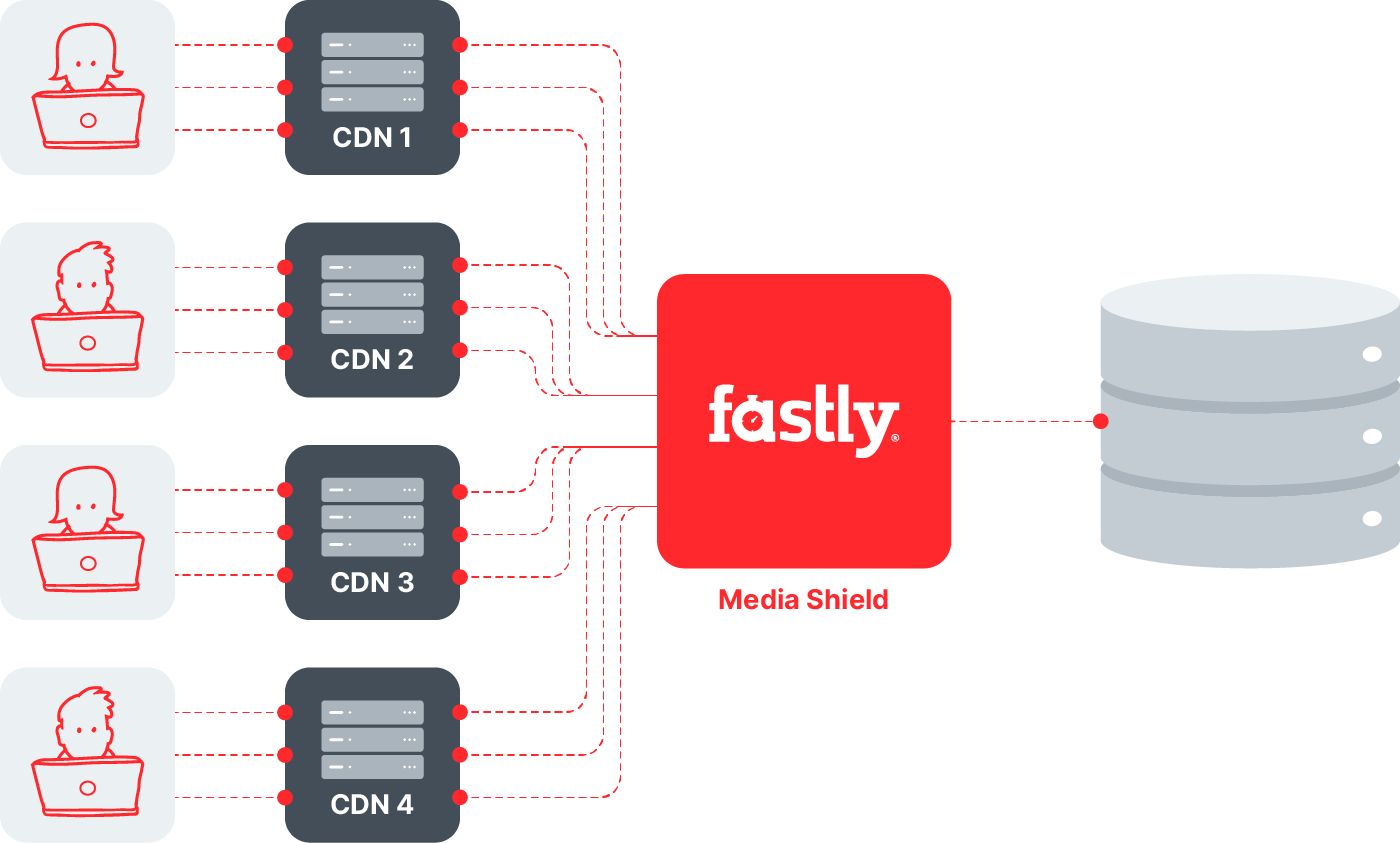 “When we have to have different code in our applications to play video from different CDNs, that creates complexity. Media Shield removes complexity with our CDNs. Simpler applications means they are more reliable, which means happier customers and more engagement. That translates into more ad dollars and subscribers.”

Cutting the costs from a multi-CDN network

More engagement means more traffic, and sometimes traffic spikes. One of A+E Networks’ biggest spikes was the Peabody award-winning documentary series “Surviving R. Kelly.” Premiering with 1.9 million viewers, the show grew to nearly 3.3 million by the final episode, making it the best performing Lifetime program of the past three years.

“We rely on Fastly to scale with our volume, and we had huge spikes in video traffic related to that show. We easily scaled to meet demand.”

As traffic increases, efficiency is critical for keeping costs under control. That’s where Media Shield really shines, protecting A+E Networks’ video origin from multiple CDN requests all at once. Request Collapsing helps manage a traffic stampede, automatically queuing multiple near-simultaneous requests for the same content so that only one request reaches the origin before the content is cached.

“When a request goes back to our video origin, that’s a double whammy of expense. We’re paying not only to deliver video from our CDN to the viewer, but also to transfer video from our origin to the CDN. Fastly has helped us achieve the kind of high cache hit ratio that keeps our streaming costs in line.”

Partnering with Fastly has also helped A+E Networks to problem solve and bring innovations to light more quickly. For example, recently the A+E Networks team was tasked with inserting a 3-second branding bumper before all of their videos. It seems like a simple ask, but between the timing of ad breaks and changing code for every video and application on every platform, it could also be a lot of work. As a separate piece of content, the application logic would get complicated and degrade the user experience.

Cool and Neralla reached out to the Fastly team, who took the initiative to develop an elegant solution that they could quickly implement. What might have been a 12-month intensive development effort was reduced to down to weeks. Even better, the solution can be updated quickly whenever logos, colors, or other brand elements change.

“Working with Fastly has been so easy. They actually make the effort to understand a problem and find solutions, and somebody is always just a Slack message away. That’s been great,” Neralla said. Cool agreed: “Fastly’s not just a provider, but a responsive partner.”

“Fastly does a great job of caching content and making sure that our streaming costs don’t skyrocket with an increase in traffic.”