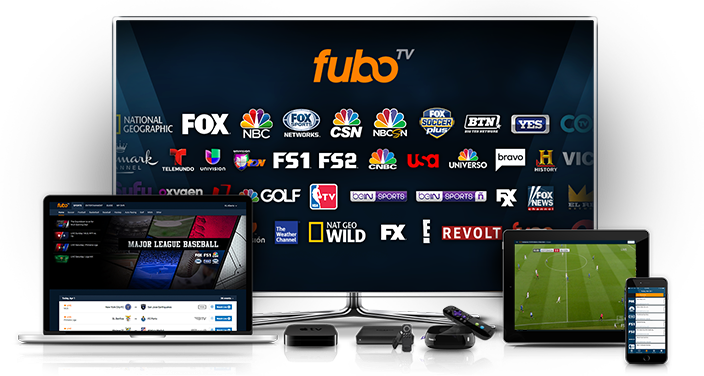 fuboTV is a global, sports-first streaming TV service that brings subscribers over-the-top (OTT) access to the most sports for the least money. This includes a growing line-up of national channels, local broadcasters and regional sports networks that hold rights to the most popular sports in the world. Officially launched in January 2015 as a streaming soccer service, fuboTV has evolved into one of the leading virtual MVPDs in the U.S. Its entry-level Fubo Premier bundle offers more than 65 channels, including up to 37 that carry sports, and brings customers access to popular entertainment, news and information content that complements the core sports offering, including thousands of titles available on-demand. It is available on desktop or mobile web via www.fubo.tv; on Amazon Fire TV and Fire TV Stick; Android and iOS devices; Apple TV; Chromecast; Roku; and through T-Mobile’s Binge On.

fuboTV is frequently the only platform available for watching high-demand sporting events: it’s therefore critical to provide reliable and uninterrupted streams for customers. Although fuboTV first approached Fastly in 2015 as an efficient solution for caching the static assets on its service, it has since leveraged Fastly’s edge cloud network to accelerate the delivery of live and on demand video, speed up APIs — allowing fuboTV to serve their applications faster, which wasn’t possible with other providers — and load-balance between data centers to ensure maximum availability for their users across the globe. With more than 100,000 paying customers, fuboTV’s user base is growing: viewing time per user is up 25% since April 2017, and traffic to Fastly has increased 7x since March 2017. fuboTV sees Fastly as a partner that complements its workflows, enabling continuous deployment while providing high-quality and reliable streaming experiences to sports fans around the world.

“Fastly offers a toolset that we wouldn't be able to build in house — we’re able to be much more nimble with everything Fastly enables us to do at the edge.”
Sung Ho Choi, Co-founder

"I recommend Fastly to everybody. With Fastly, you have much better control because you have infrastructure that you don’t need to manage and a partner you can trust."
Sung Ho Choi, Co-founder 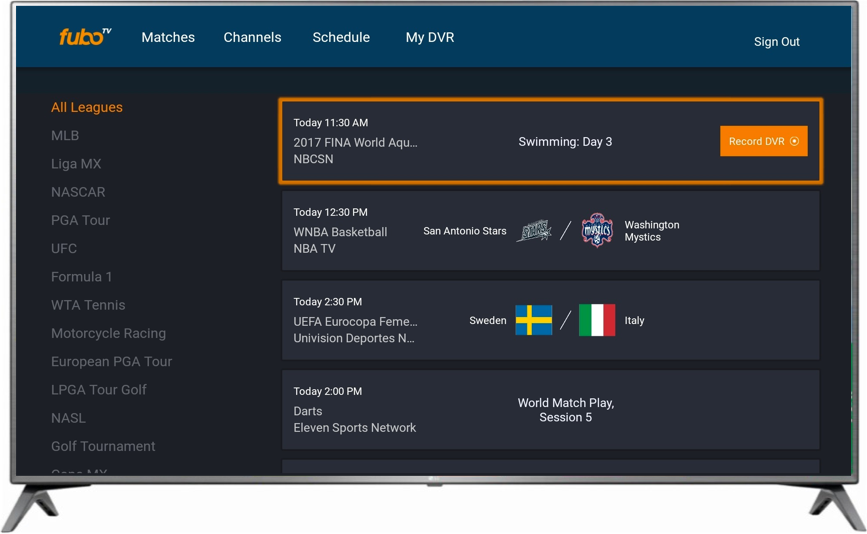 During a major event, fuboTV can see upwards of 100,000 concurrent streams, and it’s critical to offer viewers uninterrupted access to events. fuboTV relies on Fastly’s CDN as a caching layer for video content, and implements complex logic for failover using Fastly’s Custom VCL. When a request comes in, Fastly will check its primary data center in the West Coast; if the video content isn’t available there, Fastly will fail over to the Central region. fuboTV use multiple levels of failover — at the player, CDN, and API level — to ensure viewers can watch the event as it’s happening.

"Fastly enables an ongoing check to ensure we have the highest availability, so we can deliver uninterrupted live streams to our customers. The Fastly layer failover is the only option that can be completely seamless."
Sung Ho Choi, Co-founder

In advance of Super Bowl LII, fuboTV expanded its coverage from 51% to 70% of US households, and saw record-breaking engagement as a result. More than 150,000 viewers tuned in on Super Bowl Sunday, and average concurrent per-minute streams came in at just below 60,000. Unlike most sporting events — where users drop off during halftime and commercials — viewership remained high the entire game, and even increased at halftime. fuboTV saw 57% of Big Game streaming take place on TV-connected devices, and achieved a record-low buffer rate of 0.49% from 6pm to 11pm ET — about 200% lower than industry standard.

fuboTV’s streams are the closest you can get to actually being in the stadium — around 8-10 seconds ahead of other streaming platforms — which it achieves by offering smaller segment sizes, which allows for smaller buffers on both the player side and encoder side. Because Fastly allows it to cache smaller and more frequent updates, fuboTV can offer a streaming experience that’s closer to the real thing than other streaming providers.

“By enabling us to cache smaller video segments and instantly purge outdated content, Fastly’s CDN helps us deliver streaming events that are closest to being there live. Fastly also has very low latency, which shaves off several additional milliseconds as compared to alternatives.”
Sung Ho Choi, Co-founder

Because fuboTV is often the only resource for certain games, it will see large spikes in traffic during major events. For example, the World Cup Qualifier between the USA and Argentina in October 2017 brought 7x more traffic than what it usually sees on the weekends, and double its past peak event traffic. These high-demand events make it even more critical that fuboTV provides high-quality and uninterrupted streaming experiences, and it relies on Fastly to help.

“Our viewers are very passionate — if something goes wrong, we’ll hear about it — so having a reliable partner like Fastly is key. We saw massive traffic during the World Cup Qualifiers, and are continuing to see large traffic week over week. We have faith that Fastly will continue to support events of all sizes.”
Sung Ho Choi, Co-founder

fuboTV uses Fastly’s shielding feature to designate a specific POP as a shield node for their origins, protecting its origins from surges in traffic and lowering egress costs. 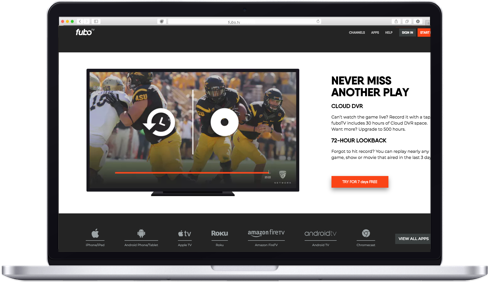 fuboTV relies on Fastly’s CDN to cache its website as well as API endpoints, which include all front end web applications (such as the program guide), mobile, Apple TV, Android TV, Roku, and Fire TV applications. Unlike other providers, Fastly enables fuboTV to cache APIs, empowering it to offer fast and reliable experiences for their viewers.

“Fastly serves our applications out faster. Because Fastly’s CDN enables us to cache APIs for the first time, our viewers get a much faster response than if requests went to our origin.”
Sung Ho Choi, Co-founder

"We’re using the Fastly geo lookup functionality to enrich the data that goes back to our APIs, inserting personalized info like what country you’re from and zip code to let you know what content is available in your area."
Sung Ho Choi, Co-founder

fuboTV does two deployments a week for every service it has — around 18-20 per week — for when it rolls out new API endpoints or front end applications. Fastly’s edge cloud network gives fuboTV control to support this continuous workflow; it relies on Fastly’s Instant Purge and Cache-Control headers to ensure it is delivering the most up-to-date applications to its users.

"We deploy 18-20 times a week — we rely on Fastly’s CDN to call out whatever Cache-Control headers we were sending before, but we also have full control over when to expire the cache. This type of agile workflow wasn’t possible before Fastly."
Sung Ho Choi, Co-founder 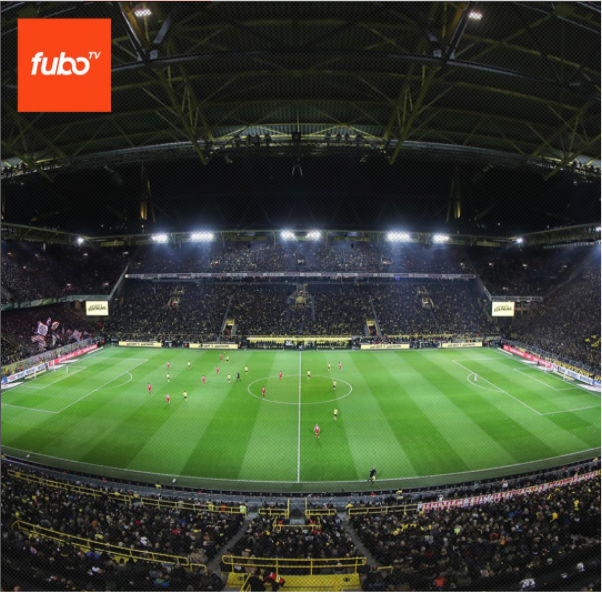 With Fastly, fuboTV has real-time access to logs, which are streamed to Amazon S3 and Google Cloud Storage to gain insight into traffic. This enables it to diagnose problems immediately.

"With Fastly, I finally have visibility when things go wrong. Because Fastly gives us access to our logs, we can self diagnose instantly — it’s much lower maintenance than with other providers."
Sung Ho Choi, Co-founder

"Traditionally we’ve lacked actual edge nodes giving us logs for every request that’s coming in — Fastly offers us that kind of immediate visibility while giving us the opportunity to experiment."
Sung Ho Choi, Co-founder 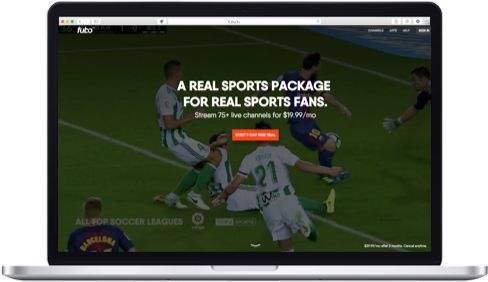 When fuboTV does need help, it finds Fastly support knowledgeable and responsive.

"With Fastly, we can reach out and get a response back within minutes, rather than hours, which was too late for our viewers."
Sung Ho Choi, Co-founder