How Fastly Supports an Ethical and Open Internet

At Fastly, integrity is at the heart of not only the product, but the company. We founded our company on strong ethical principles, and surround ourselves with like-minded partners and customers. We choose to work with companies and projects aligned with our own business values — that have integrity, that embrace transparency, and that are trustworthy and ethical. Our edge cloud platform offers critical infrastructure that can help support fast, secure, and scalable operations for many diverse organizations – and we offer free services for open source and nonprofit projects like RubyGems, Haskell, Donors Choose, Reporters Without Borders, Direct Relief, and Kiva (to name a few) through our Open Source and Nonprofit Program.

Our goal is to help serve and grow open source projects: enable creators that want to dabble, fine tune their ecosystem, and even change the landscape of open source — and to help projects that do not monetize their traffic, but are for the good of the community. We also collaborate with companies that support open source development at their core, and that are key to the developer community, like NPM, whose 3.5 billion package downloads per week go through Fastly. We want to enable project maintainers and organizers to focus on their mission, and not on nitty gritty scaling issues.

Here’s a look at some of the great open source projects we support — The Python Foundation, RubyGems, HashiCorp, and Tor — and how significantly they’ve grown.

As Donald Stufft, the maintainer of PyPI, explains:

“The global CDN and Varnish caching provided by Fastly provides one of the single largest reduction in operations effort that we have. Every request to PyPI goes through Fastly, and through their caching we’re able to prevent almost 90% of incoming traffic from ever reaching the origin servers.”

RubyGems.org is the Ruby community's gem hosting service. They joined our Open Source Program in early 2014 to help deliver their gem downloads (including the Fastly gem) to their increasing global user base. They’ve also grown significantly in the past few years; in 2017, RubyGerms.org had:

Fastly and HashiCorp share complementary values — both companies empower developers and DevOps teams, and push the limits of what’s possible inside the data center and beyond. As long-time users of HashiCorp projects, we are happy to host and serve their downloads globally as their user base continues to grow year-over-year; in 2017, HashiCorp had:

In summer 2016 we began sponsoring the Tor Browser Project, serving their browser updates free of cost over the Fastly network.

They highlighted some of their growth in a recent blog post: 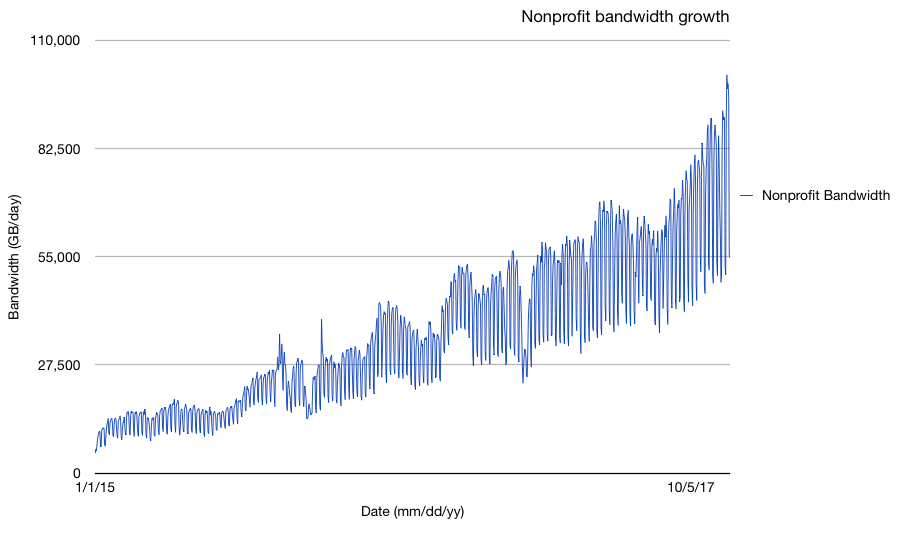 As we continue to grow as a company — scaling with care in order to best serve our customers — we also look forward to growing our Open Source and Nonprofit Program. We are proud to serve the best parts of the internet, and this extends to open source and nonprofit projects. In the past year we’ve more than doubled open source and nonprofit traffic on our network, but our work is certainly not done. We want to enable those who do good in the world, give them a voice, and widen their reach. In 2018, we aspire to help more projects and organizations achieve their mission to make the world (and the internet) a better place.

If you have a project that could use our support, don’t hesitate to reach out to us at community@fastly.com.

Elaine Greenberg is a Senior Communications Manager at Fastly and co-organizer for Papers We Love SF. Trilingual in Russian, French, and English, she got a BA in Neuroscience at Wellesley College. In her free time, she obsesses over dogs, textured neutrals, and well-arranged florals.