Distributed denial of service (DDoS) attacks are a pretty nasty topic; as CEO Artur Bergman notes, it’s emotionally damaging to be a victim of a DDoS. Fundamentally, a DDoS is an attempt to make machine or network resources unavailable to the intended users: an attack on your infrastructure, customers, and employees — on the entire being of your company. As an edge cloud platform with a large network of globally distributed points of presence (POPs), we’re in a unique position to track global traffic patterns, and we defend our customers against attacks on a daily basis. In this post, we’ll take a look back at the history of DDoS, sharing how these attacks have evolved and the trends we’re seeing. Getting a handle on the various shapes and sizes of DDoS will help inform how you address these attacks on your own infrastructure — you may not always be able to predict attacks, but knowing what’s out there and preparing for the worst will help you protect and mitigate.

In the last 20 years, DDoS attacks have become front-page news; they’re often tied to high-profile events — everything from the Olympics and Super Bowl to political events such as elections, political parties, and news coverage are targeted. DDoS attacks are an easy, accessible way for people to achieve their aims — whether that’s putting a competitor out of business or silencing somebody. It’s all about making a statement in a very visible, impactful way.

Here’s a DDoS attack – you have traffic coming from a lot of different sources and going where it shouldn’t:

Here’s another view — a medium-sized DDoS, at about 160 Gbps: 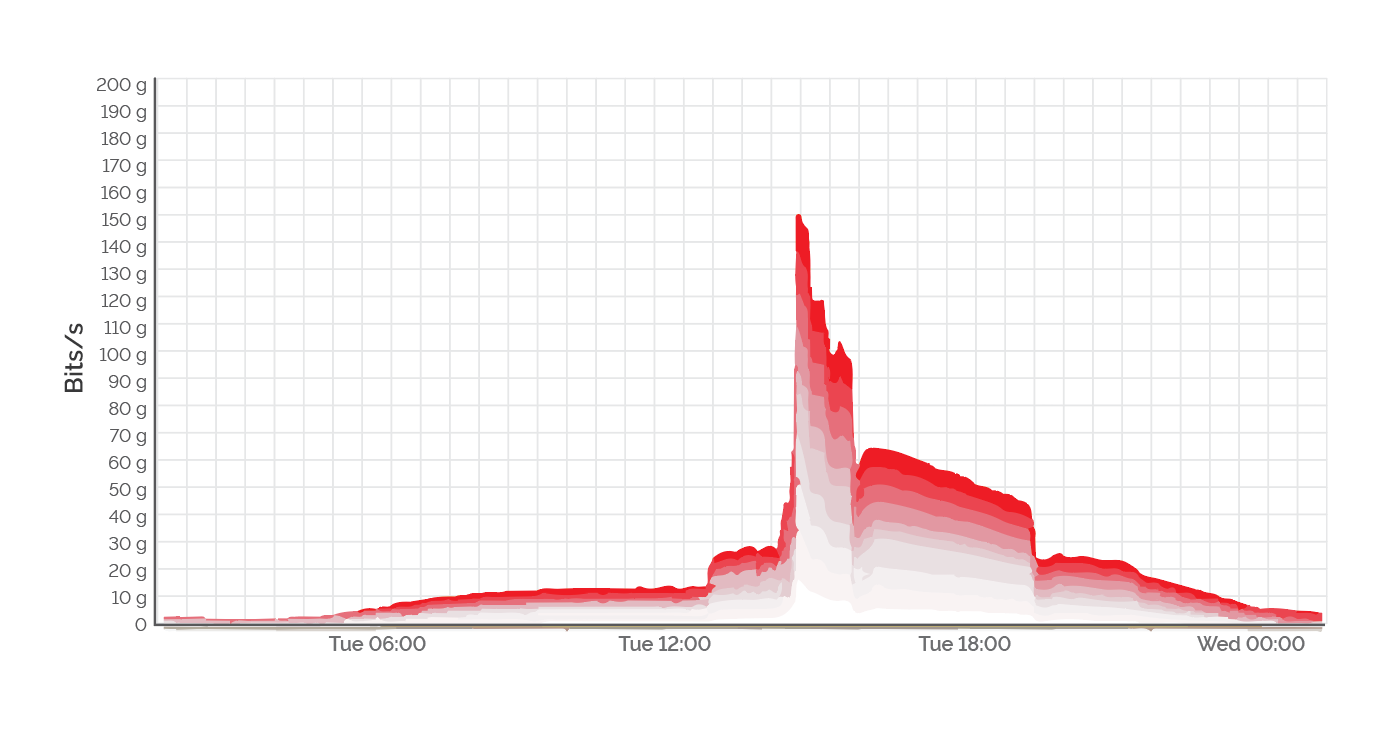 You can see the DDoS begin probing about two hours before the full attack, and then the floodgates open.

DDoSes can be divided into types:

The rise in popularity of Internet of Things (IoT) devices — like DVRs, IP cameras, and NVRs (network video recorders) — has set the stage for massive IoT botnet attacks. The largest and perhaps most famous of these were last year’s Mirai attacks against security journalist Brian Krebs and DNS provider Dyn. The connections poorly secured IoT devices have to big networks plus an uptick in bitcoin-enabled extortion provide ample and easy opportunities for attackers. For this reason a number of people in the industry have been keeping and eye on the new IOT Reaper (aka IOTROOP) botnet, which has yet to launch any DDoS attacks of note.

Here’s how varied and complex DDoS attacks can be (adapted from a 2004 paper by J Mirkovic and P Reiher): How did we get here? Here’s a look back at DDoS attack traffic evolution:

Throughout this time, the theme has remained the same: the attacker wishes to overwhelm the victim’s resources, and malware or exploits provided leverage. The victim must expend time and effort to drop attack traffic and maintain legitimate traffic. Each side must expect different amounts of work to achieve their aims, with the defender typically paying more money than the attacker.

Stay tuned — in our next post, we’ll share some of the methods we use to protect our customers from DDoS attacks, including leveraging both the Security Research and Network Engineering teams. We’ll offer an inside look at a DDoS attack, plus how you can apply the lessons we’ve learned to your own infrastructure.