Our CDN gives us a unique, real-time view of aggregated traffic patterns on the web: because we power tens of thousands of websites, including Shopify, Dollar Shave Club, KAYAK, Wayfair, and Ticketmaster, we can see how people engage with major cultural events online. With the 2016 holiday shopping season upon us, we took a look at how shoppers have engaged with ecommerce sites.

30% of annual retail sales occur between Black Friday and Christmas, making this a critical time for retailers everywhere. Over 70% of consumers planned on doing their shopping online this year — as expected, we saw a 207% increase in traffic as compared to normal at 11 AM ET on Black Friday. But, traffic spikes weren’t isolated to our ecommerce customers. We also saw increased engagement with charity donation sites as well as food-related sites — in the following post, we’ll detail some of the insights we saw from Black Friday through Cyber Monday.

Shopify is the leading cloud-based, multi-channel commerce platform designed for small and medium-sized businesses, and we’re pleased to count them among our ecommerce customers.

Shopify powers many of the top online sites, including major brands such as Tesla Motors, Red Bull, Nestle, GE, Kylie Jenner, and hundreds of thousands more, giving them a front-row seat for the holiday shopping surge. With that in mind, we worked with them to share how shoppers engaged online during this peak shopping season, comparing holiday traffic to the same time span a month prior (October 23-29). 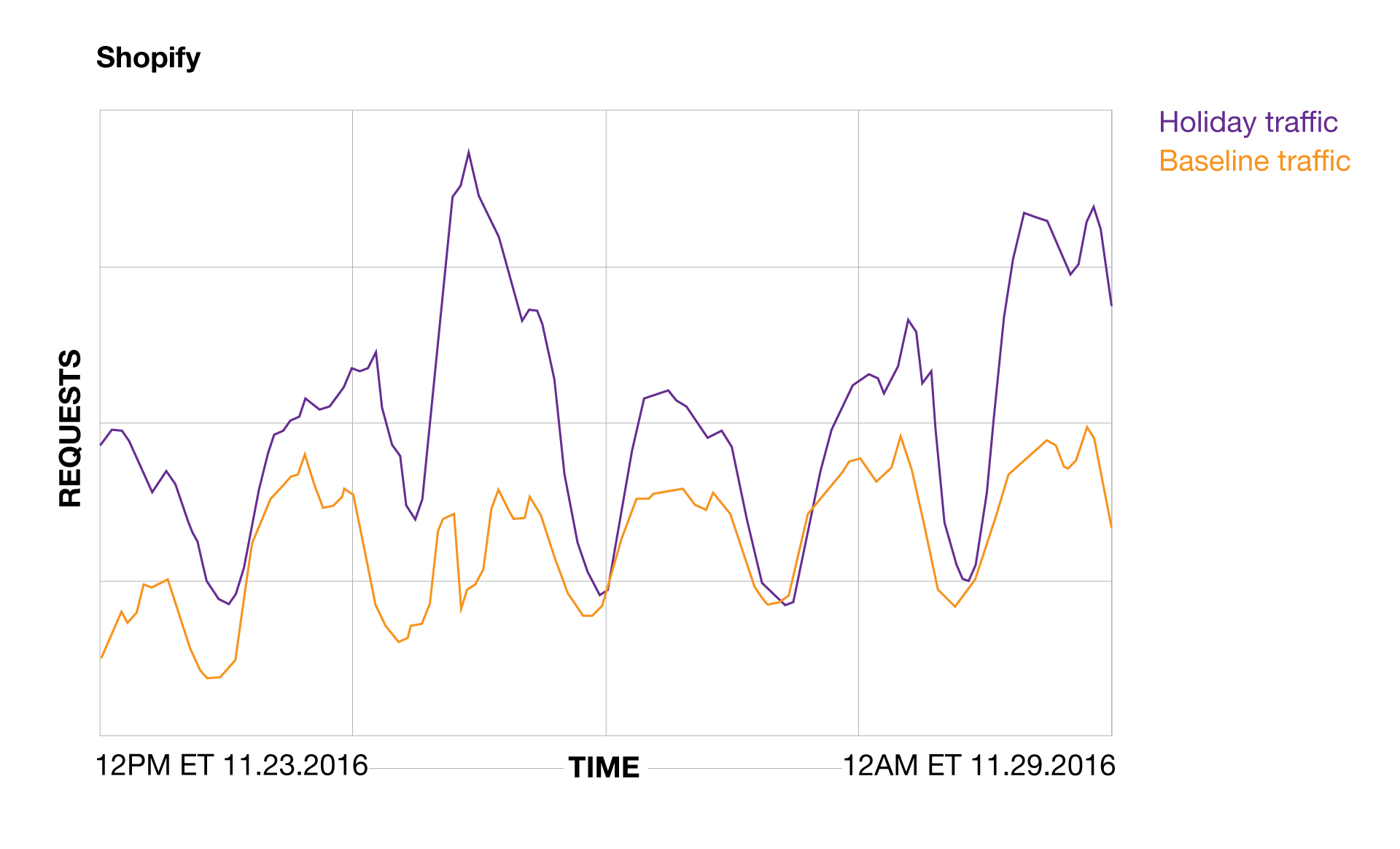 Here’s a timeline of what we saw:

Traffic to ecommerce sites remained higher than normal throughout the week of Thanksgiving, with more traffic overall on Cyber Monday than Black Friday — as of 9 PM ET on 11/28, traffic was 39% higher as compared to 9 PM ET on 11/25. 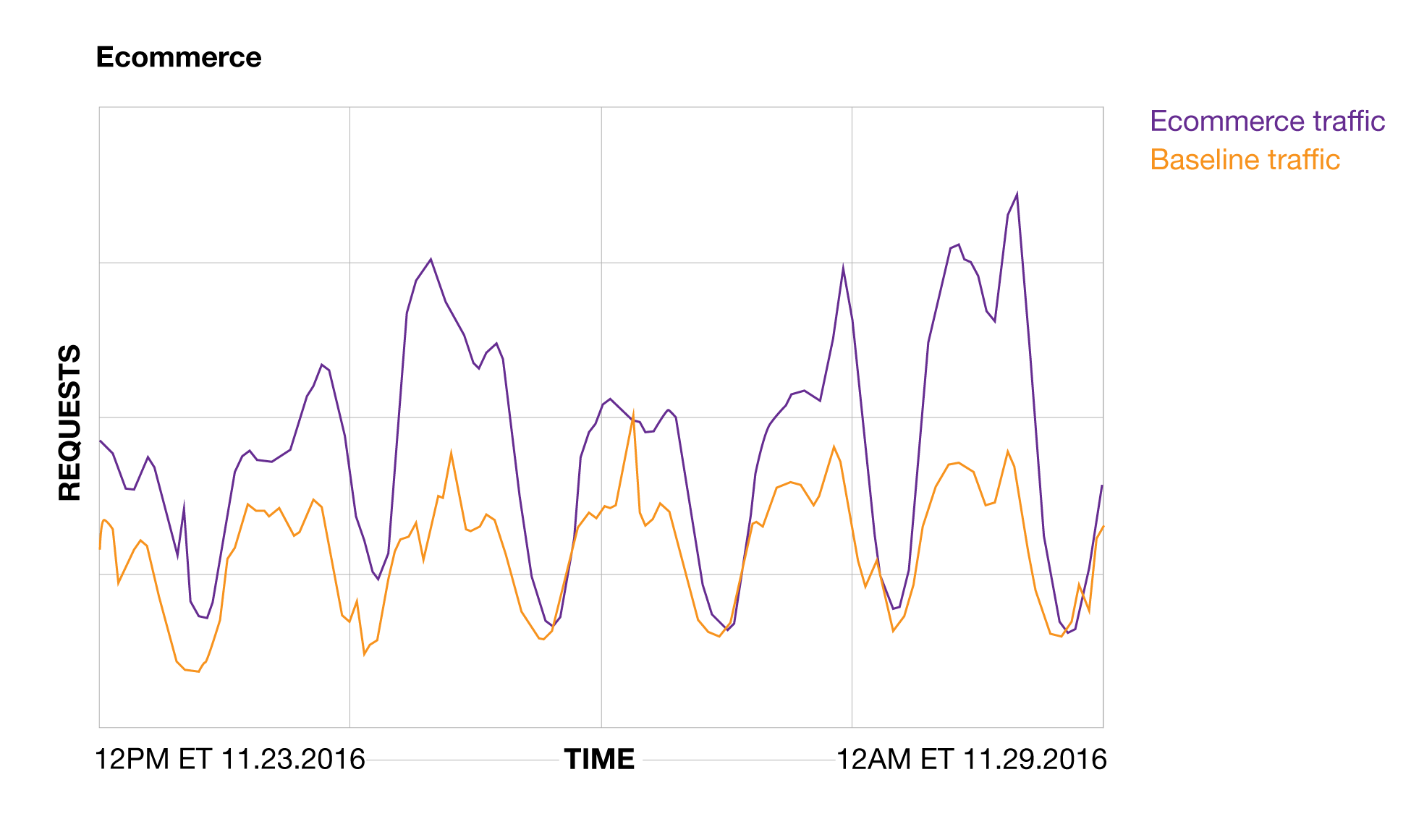 Traffic to food-related sites rose higher than normal through the evening of Thanksgiving as people turned to trusted online sources for recipes and cooking tips, finally dropping off around 7 PM ET as holiday cooking wrapped up. 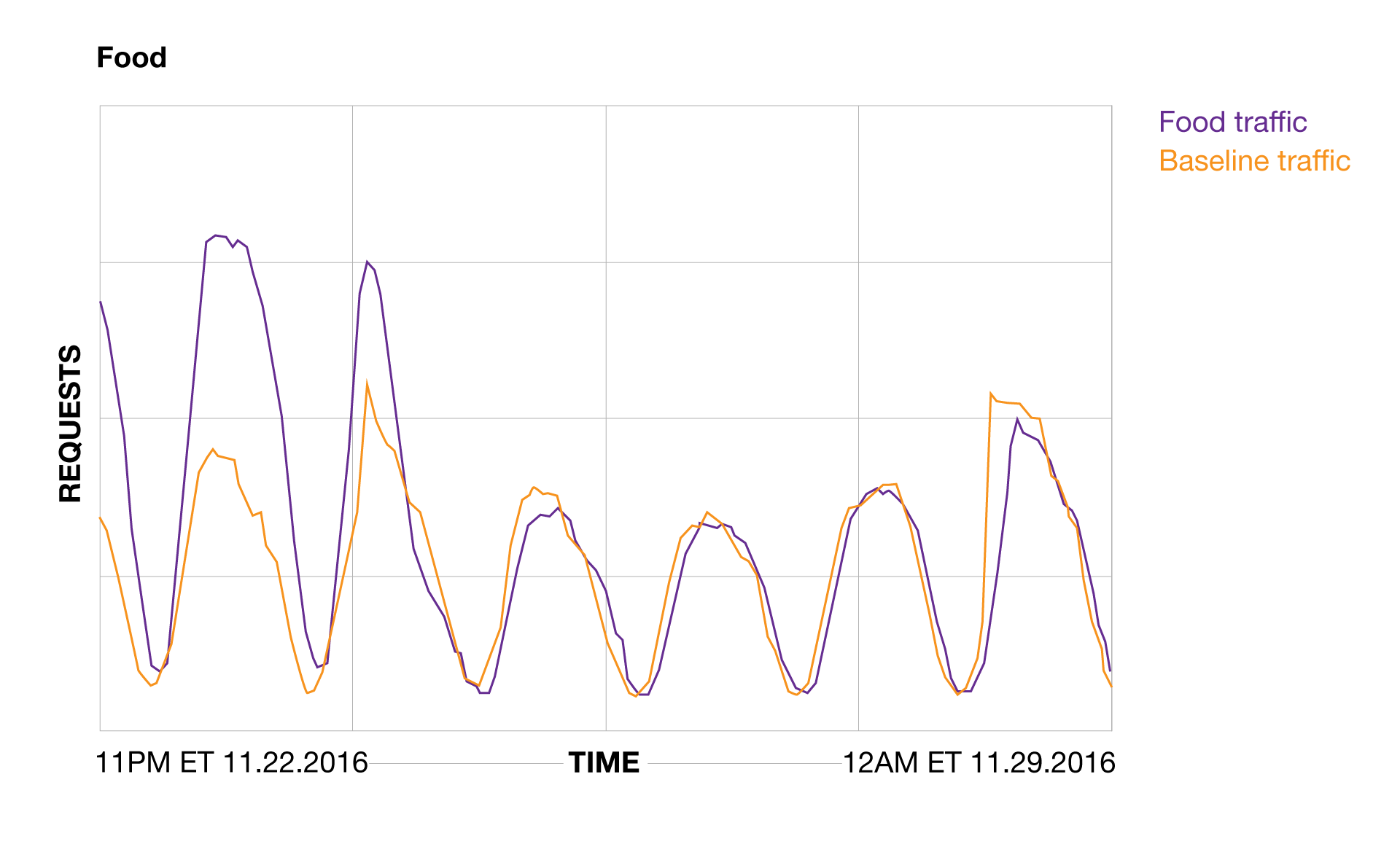 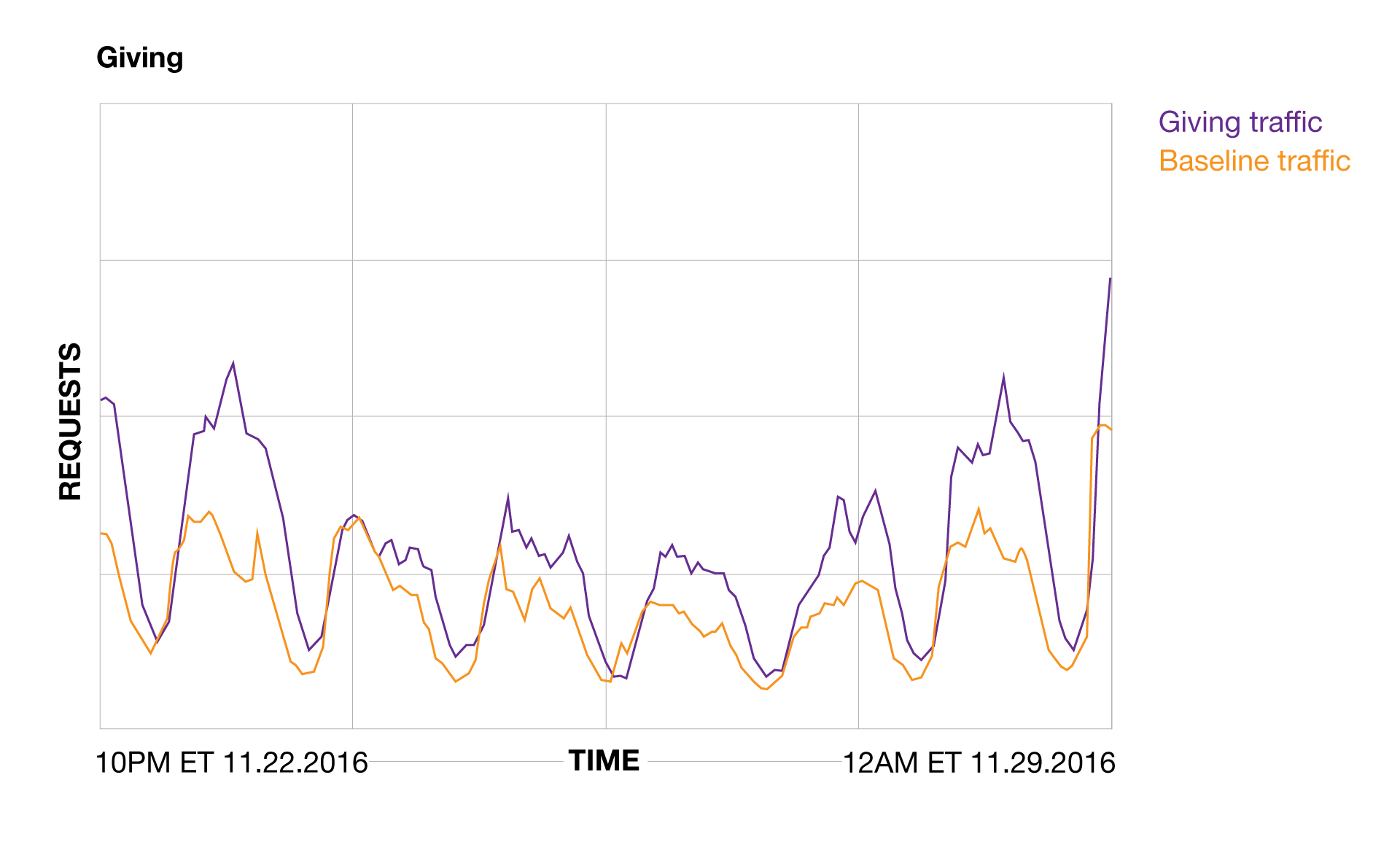 People are shopping and giving this season – here are some of the traffic trends we saw:

Giving Tuesday is celebrated on the Tuesday following Thanksgiving, and marks one of the biggest days of the year for donation and charity sites: last year, over 700,000 people raised $116 million in over 70 countries. We’re pleased to count the American Civil Liberties Union (ACLU) as one of our customers. 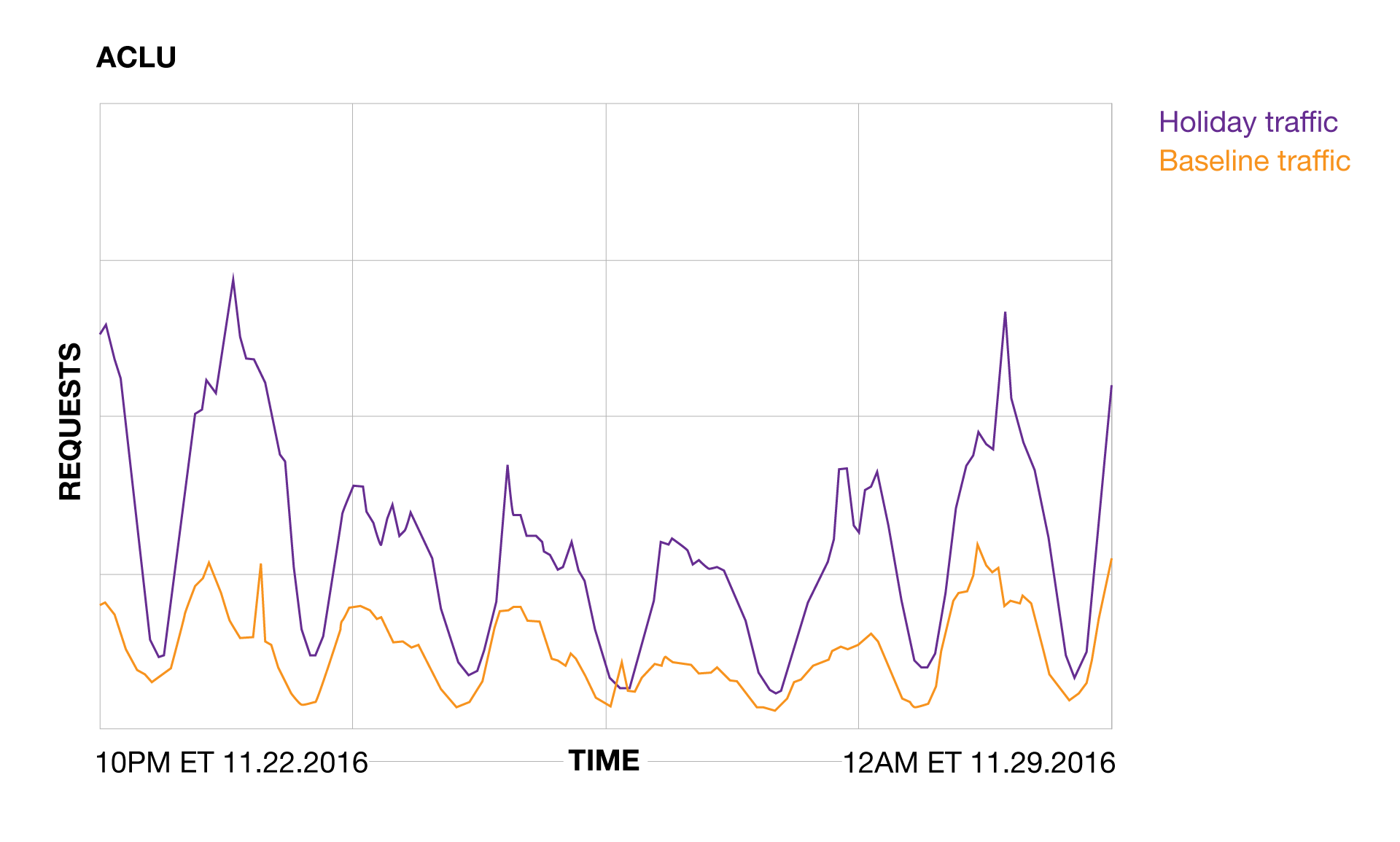 Here’s a timeline of what we saw during the week of Thanksgiving:

Keeping an eye on real-time insights

We’re pleased to work with our customers to share these traffic patterns as they happen, and recently launched our real-time insights to offer a holistic view into major moments of engagement. Check it out for an easy-to-reference timeline of events, and stay tuned — we’ll continue to report on how the internet reacts to major events in 2017.

2016 was an eventful and emotional year, filled with surprises, cultural losses, tragedies, and the occasional glimmer of hope. Although we looked at 2016 as a whole, we found that the most instant and dramatic…

The Tuesday after Thanksgiving marks one of the biggest days of the year for donation sites, and giving numbers hit record highs this year. We’ve collaborated with the ACLU to share some hope-inspiring donation data….

Although online engagement increases with every election, the 2016 presidential election saw an especially dramatic boost. As surprising polling results rolled in across the nation, voters and global observers turned to trusted media sites to…