Fan or not, Tom Brady’s tenth appearance in the league’s championship game was unprecedented. In his first Super Bowl appearance with the Tampa Bay Buccaneers, he led the team [spoiler alert!] to victory over 2020’s champion, the Kansas City Chiefs. Because the COVID-19 pandemic prevented large gatherings of friends and family from watching the big game together, many people stayed home, watching the game with household members on television or streaming it online. This year, Fastly joined multi-vendor tech stacks to help stream the Super Bowl for multiple digital media customers, providing us with a unique perspective of online behavior during the game. Across our network, we also observed traffic trends for social media, meme creation and sharing, and online retail.

Reviewing aggregated streaming traffic (Tbps) across this set of digital media customers, we observed that traffic grew by 211% between 5:00 pm EST and kickoff at 6:39 EST. Peak streaming traffic occurred towards the end of the 2nd quarter, representing an increase of 350% from 5:00 pm. At the time this peak traffic level was reached, it was 394% higher than the aggregate traffic for these customers observed the previous Sunday, and 91% higher than two weeks prior, during the AFC Championship game, where the Kansas City Chiefs beat the Buffalo Bills.

When plotting the aggregate traffic volumes for the Super Bowl streams over time, we can identify when the commercial breaks occur due to brief drops in traffic as advertising content is delivered separately from the main streams. Unfortunately, listing the advertisements shown during the commercial breaks in callouts on the graph would have quickly made it crowded and unreadable. However, the ads remain available online for your post-game viewing enjoyment. 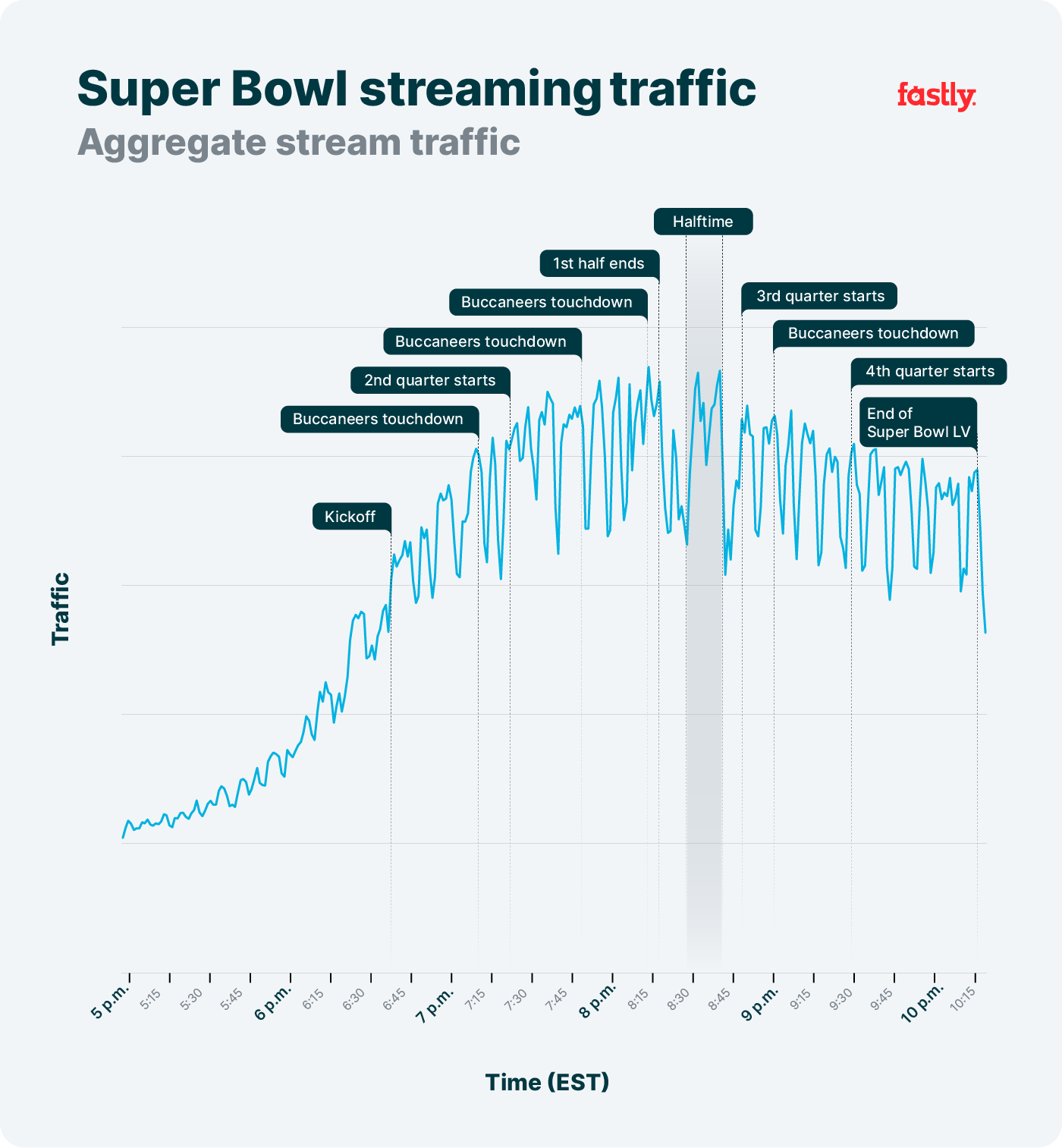 Heading into the big game, aggregated traffic from Fastly’s social media customers was already lower than the preceding weeks — at kickoff, it was 8% below the previous Sunday, and 22% below two Sundays prior, the day the NFC and AFC Championship games aired. It continued to drop gradually throughout the game before picking up just before the end of the 4th quarter. We observed that the average requests per second (RPS) to social sites was 2% higher in the 1st half than in the 2nd half.

The “W” visible in the middle of the graph below aligns with when The Weeknd’s halftime show took place — users paused their social sharing for a few minutes to watch the performance, and then went right back to it when the game resumed. RPS volume across this customer cohort dropped 8.5% during halftime as compared to the average volume during the game’s first half. At its lowest point during halftime, the volume was 11% lower than the same time the week before, and 19% below the same time two weeks prior, during the AFC Championship Game. This traffic shift is in line with what we have observed over the past several years, including 2016’s Beyonce Drop, 2017’s Gaga Dive, and 2020’s 16% decline when Shakira and Jennifer Lopez took the stage during halftime. People are generally tuned into the live content, pausing their online scrolling and posting to watch the performance. 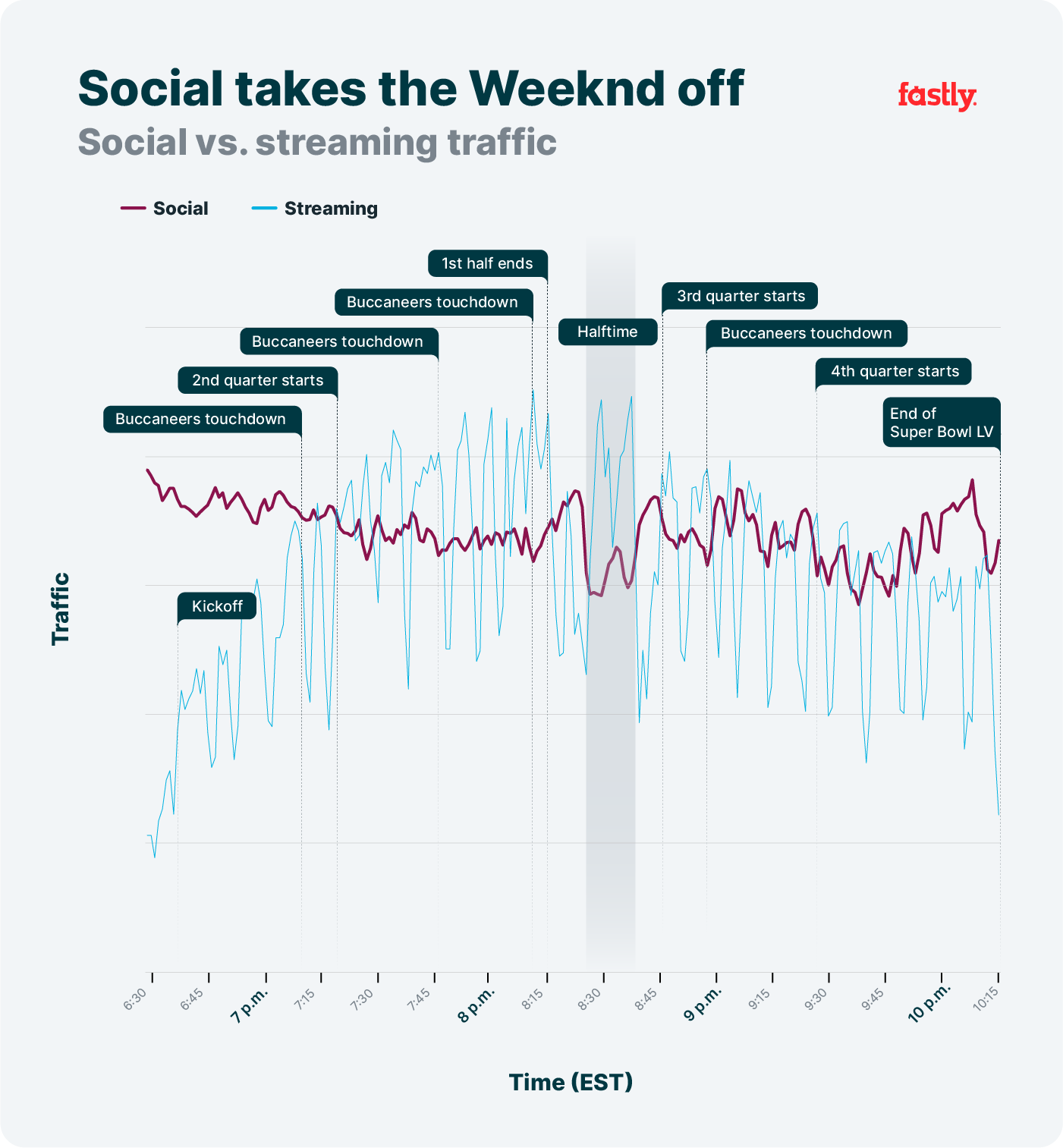 While most Super Bowl ads feature fabulous sets, major stars, and the highest production value, this year one of the most memorable ads was a static image. And if you blinked, you may have missed it — it only appeared for five seconds. During the game, our customer Reddit ran a screenshot of a post from their platform with the headline, “Wow, this actually worked”. And it did — in the moments after their ad ran at 8:23 pm ET, their traffic jumped 11%.

Sorry we crashed your SuperbOwl party from r/blog

Meme-ing peaks after touchdowns, halftime, and end of game

Key plays, popular commercials, and halftime moments make for great meme fodder during the Super Bowl. In 2020, the three most meme-worthy moments included Jason Momoa’s commercial for Rocket Mortgage, the halftime show, and the end of the game. During Super Bowl LV, the Internet wasted no time creating and sharing memes of The Weeknd’s halftime show, visible as the post-halftime spike in the graph below, resulting in an 18% increase in RPS volume for Fastly’s cohort of meme creation and sharing customers as compared to the average RPS volume during the first half of the game. Nominal spikes in meme traffic also appeared to follow each of the Buccaneers’ touchdowns, with peak meme traffic during the game following the 3rd quarter touchdown.

However, peak meme traffic occurred after the game was over, as users closed their game streams and turned to meme-ing their favorite moments, with an RPS volume 8% higher than the post-halftime spike and 7.7% higher than the 3rd quarter touchdown peak. Overall, average RPS volume for these customers increased by 6.1% from the 1st half of the game to the 2nd half.

While traffic to these sites remained well above aggregate RPS levels seen throughout the same time period the previous Sunday, it frequently spiked well above and dipped just below RPS volumes seen during the NFC championship game two weeks prior. 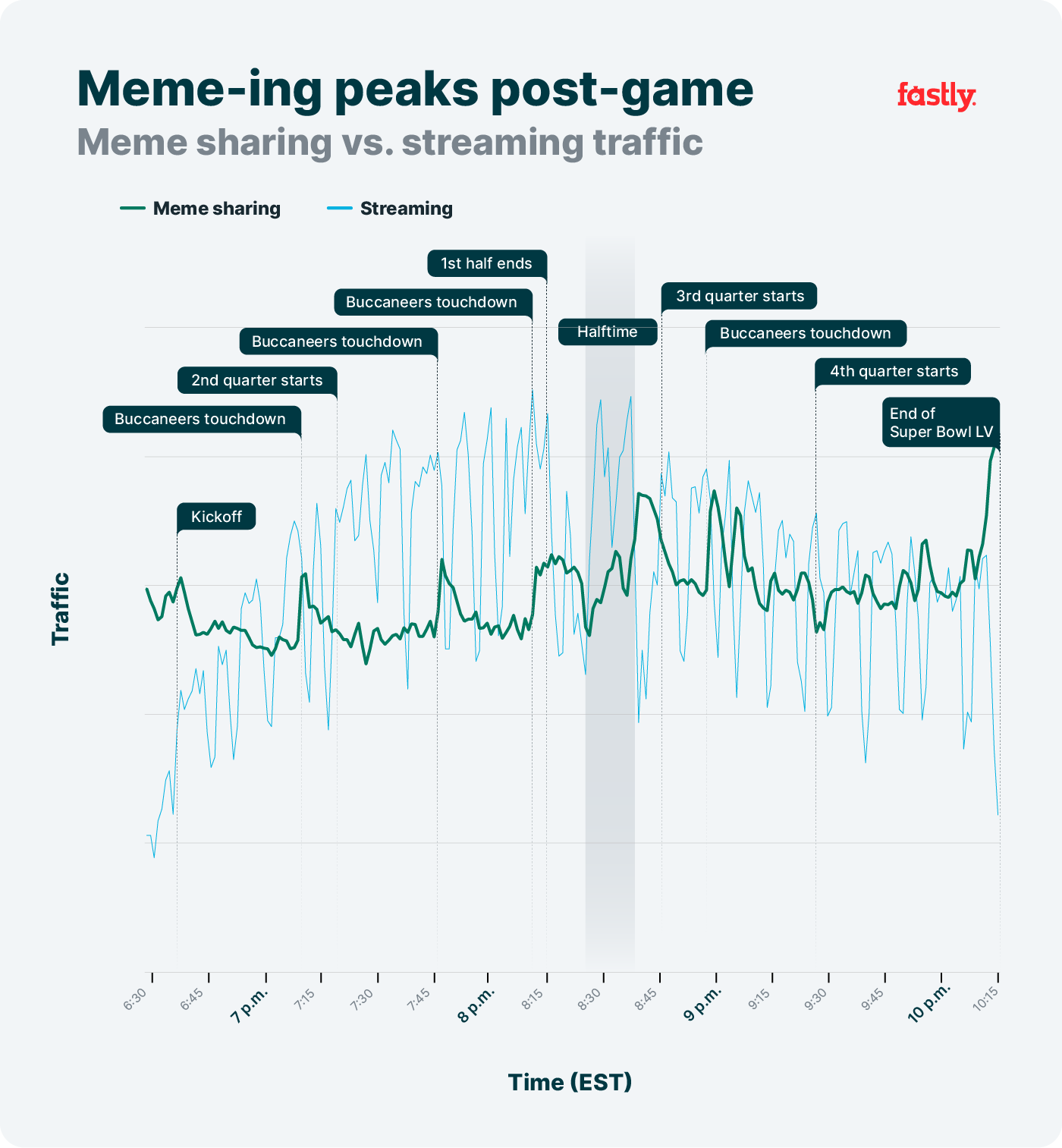 Heading into the big game, online shoppers were apparently otherwise occupied, as aggregate RPS volume for Fastly’s top 100 US Online Retail customers (the same customer cohort used for our Cyber Five blog post) was 13% lower at kickoff than at the same both of the prior two Sundays.

Throughout the game, average RPS to the top 100 US Online Retail customers was 2.5% higher in the 1st than the 2nd half. And while the traffic decline starting around 9:30 pm EST is consistent with patterns seen on the previous two Sundays, the sharp drop at the end of the game would seem to indicate that people stopped their shopping/viewing multitasking at that time, putting away their devices to focus on cleaning up or getting ready for bed. 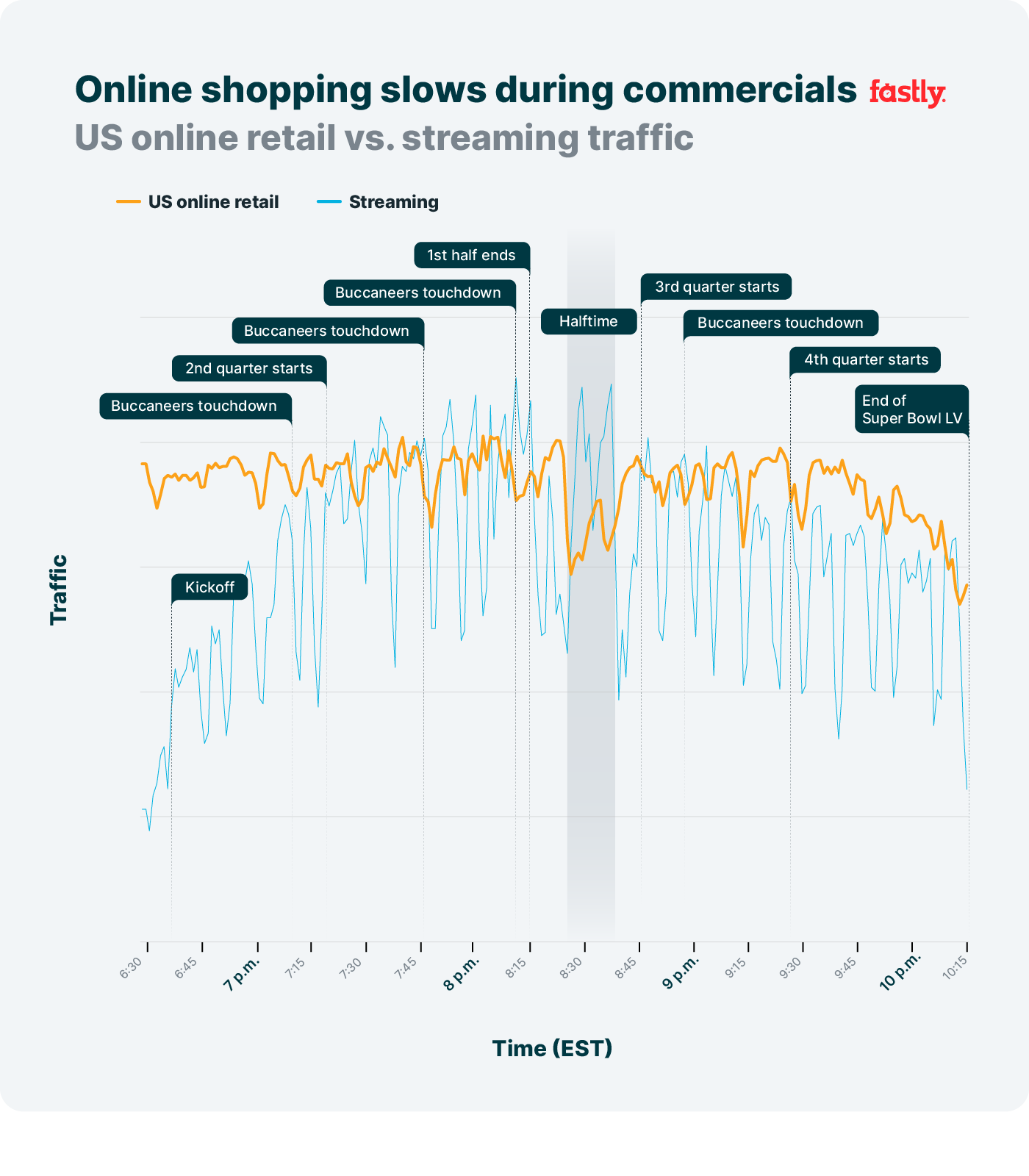 As we also saw during the recent Biden/Harris inauguration, major streaming events drive shifts in traffic across multiple verticals, as user behavior changes in response to the event. However, what the graphs in these posts don’t illustrate is the effort undertaken by the network teams to ensure there is sufficient capacity available on Fastly’s platform to accommodate the spiky traffic associated with such events, as well as the work done by our customer support teams to ensure that both our customers and their users continue to enjoy high quality experiences. Hats and helmets off to these teams and their dedication to providing these flawless experiences and to maintaining customer satisfaction and trust.