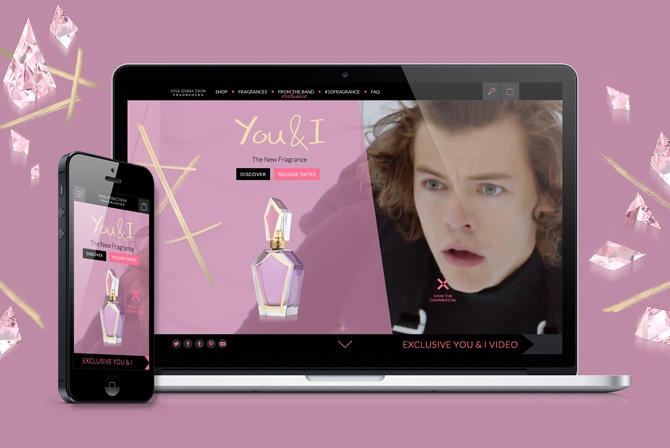 Catch Digital is a full service digital agency, providing a range of services, such as online promotional strategy, SEO, mobile web consulting, and social media management, across US and European markets. The agency uses Drupal for website development, and counts Rimmel London, Caterham Cars, Zoological Society London, and Sally Hansen among its customers. With the help of Fastly, Catch Digital recently launched One Direction Fragrances, a responsive ecommerce store built on Drupal that showcases exclusive content for One Direction fans.

The One Direction Fragrances ecommerce site required a CDN that would give the Catch Digital team increased control over their cache configurations. They were excited about Fastly's use of Varnish, a state-of-the-art web accelerator designed for high performance content delivery, and Fastly's Drupal module, which made setup easy. Catch Digital actually worked with Fastly’s knowledgeable customer support engineers to improve Fastly’s Drupal module; read more about their work here.

“Fastly is an exciting CDN and the most professional choice for teams that want total control over their caching layer, but still want an easy-to-use CDN.” Leon Kessler, Head of Development, Catch Digital

Built on Varnish for increased control

Fastly is built on Varnish, which allows for high-powered content delivery including the ability to instantly purge content across its global network. Using Varnish Configuration Language (VCL), Catch can customize their Fastly configurations, resulting in more intelligent caching.

“Setting cache rules based on something as specific as the cookies in the request is something we would normally only consider possible running our own Varnish server. Having the ability to do so at the CDN layer makes our setup much more powerful and streamlined. We are also able to ensure certain file formats are always served from Fastly, and in theory never have to hit our origin more than once.”

“Varnish is incredibly important to us because we can control the VCL if we want to make changes to the caching layer. With most CDNs, you don’t get that kind of flexibility, but with Fastly you do.”

When visitors to One Direction Fragrances' online store begin adding items to their baskets, Catch Digital needed to ensure that Fastly wouldn't cache the shopping basket page. Through VCL in Fastly’s Drupal module, Fastly looks for a session cookie in requests, and either serves the user the requested page from the cache if there’s no cookie or sends the request to be served from the origin if there is.

Catch Digital uses Fastly to configure multiple domains, which lets them easily test changes to their sites. With one site as the production service and the other as a development environment, Catch can preview any potential changes, ensuring that updates won’t adversely affect the site’s performance.

“Having the ability to update different services in Fastly is really cool. If we have new VCL or any changes we want to make to our Fastly configuration, we can do that on the development environment site and make sure everything works perfectly before pushing changes into production.” 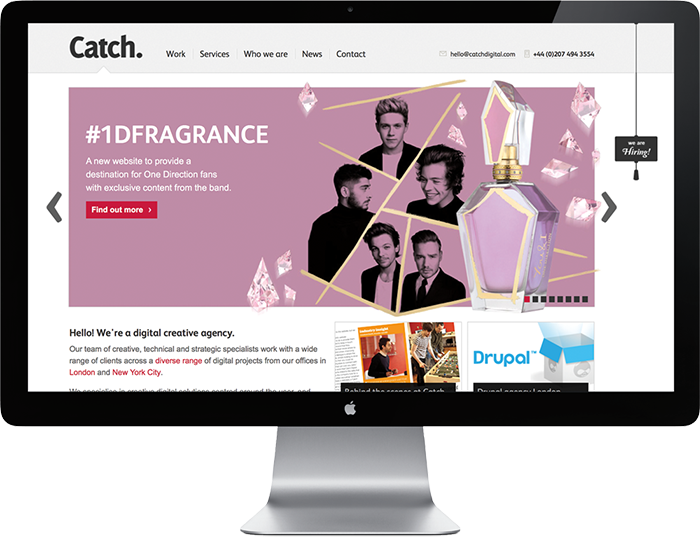 Fastly’s ability to instantly purge content enables businesses to cache anything, including the dynamic content found within One Direction’s fragrance store. When the store was promoted to One Direction’s 20 million Twitter followers and 34 million Facebook fans, the site experienced a 25x spike in traffic. With Fastly in front of the site, Catch’s infrastructure was able to handle the increase in traffic while maintaining performance.

Achieving such high cache hit ratios significantly improves the experience for visitors to the One Direction Fragrances website. With Fastly, the agency can serve nearly all content from the edge instead of origin, which improves site performance for millions of One Direction fans globally.

“The traffic was beyond anything our load testing was really able to cover. With Fastly in place, we were able to easily handle the load, ensuring there were no holes in the setup that would cause issues on our origin servers. We were monitoring our cache hit ratio in real-time, and we were seeing 98-99%. We managed to reduce our number of servers quite a bit, and we’re extremely happy with the cost savings outcome."

“Internet users want to get content as quickly as possible, so it helps if the content is delivered from a server close to them. The One Direction Fragrances site gets traffic from different parts of the world, even though the band is UK based. Most of their traffic comes from the US, and having a CDN in front of the site has helped tremendously. With Fastly, those US-based users aren’t making requests all the way to the UK for the content, which greatly improves their experience on the site.”